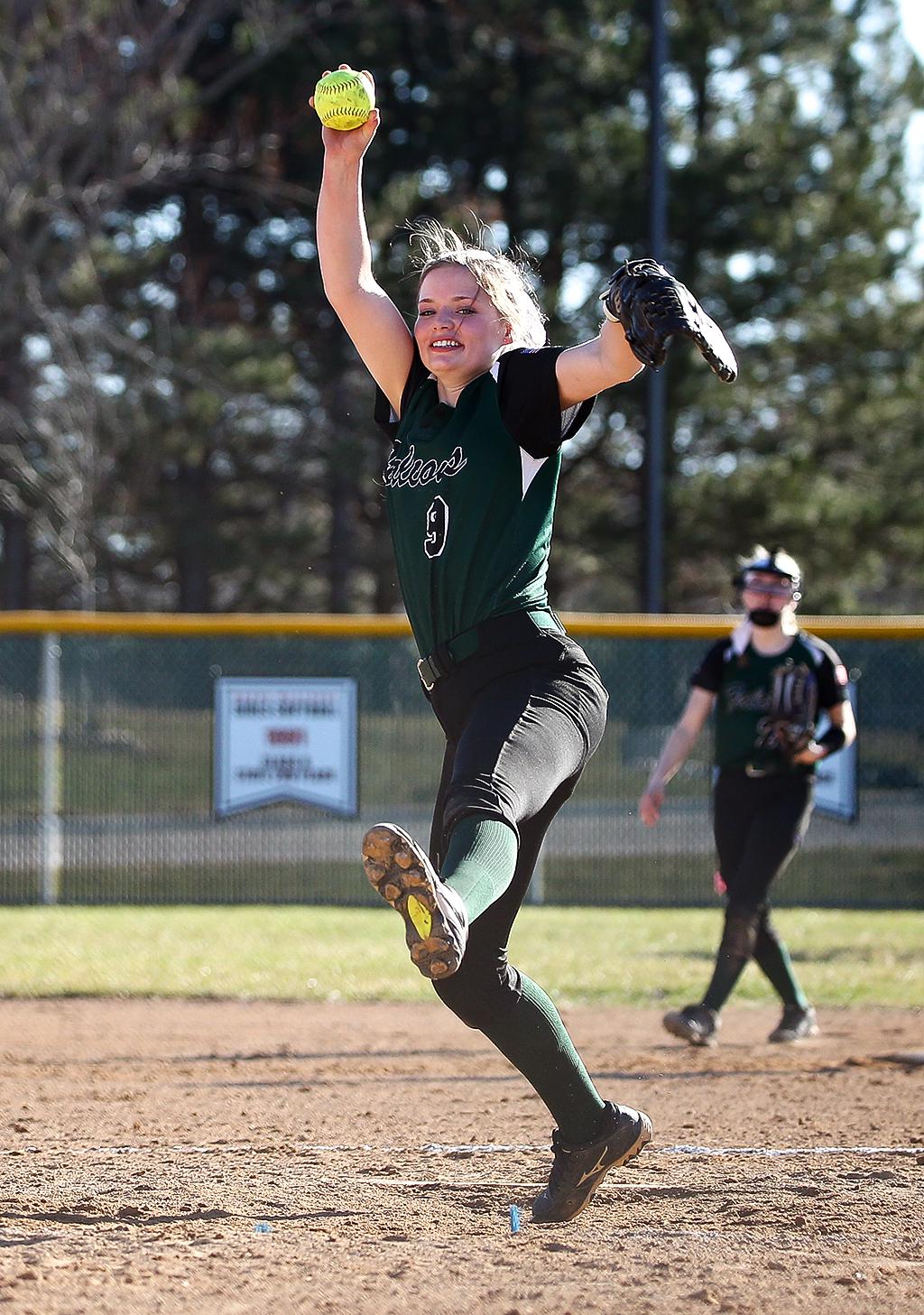 There were very high highs and some tough lows over the last six years for McKayla Armbruster. As Faribault’s senior ace pitcher sees her varsity softball career soon coming to a close, she can say she’s seen it all.

Last year was the peak — the 2018 Class 3A state championship, ending a tournament run where Armbruster threw a no-hitter in the state quarterfinals and a one-hitter in the title game. 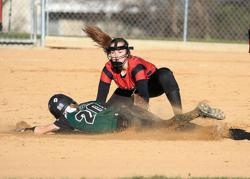 “That was something we’ve always been dreaming about, and that was just our main goal last year,” she said Friday. “But actually experiencing it was just insane, because it almost didn’t feel like it was real.”

At the outset of her career, it was a different story. Wins were few and far between when she was a seventh- and eighth-grader. The Falcons improved to 16 wins in 2016 when Armbruster was a freshman. Faribault won its first 19 games of the 2017 season before a disappointing finish in a Class 3A, Section 2 that features southern Minnesota powerhouses Mankato East and Mankato West. In 2018, the Falcons were champions. In 2019, they look to repeat.

If Armbruster carries on the way she has thus far this spring, that dream is very much in play.

Armbruster maintained her lead on the rest of the state in strikeouts, adding 10 in a 12-0 non-conference win at Mound Westonka Friday. in 31 innings pitched this season, Armbruster averages more than two striekouts an inning and has yet to issue a walk. In five starts, she’s 5-0 with 71 strikeouts and three shutouts, including a perfect game in the season opener against Albert Lea — her third such varsity performance.

Faribault coach Chris Silber said Armbruster always had the attitude of attacking batters and getting better. Now as a senior, the pieces are all there to continue to be dominant.

“Now she’s put in all the work and she’s got all the muscle and all the speed and all the focus, and she’s been able to become — she’s backing up the bark she had when she was younger,” Silber said. “Now she’s got the bite, too.”

Teammate Abby Van Ryn is another Faribault senior who’s helped the Falcons ascend to the top of Class 3A, as well as infielders Lauren O’Neil and Ellie Knutson. Armbruster said chemistry and shared experience has been a big reason Faribault is successful now.

“Her and Abby together, phenomenal battery,” Silber said. “Can’t ask for much better. We went through all the lumps and ups and downs of being 1-17 and 5-and-something, 6-and-something. To see those kids do that, it’s why you coach.”

Despite the final score, Mound Westonka had its moments against Armbruster, tallying six hits — about as many hits as Faribault’s first four opponents had total balls in play against the senior. But when pressed, she responded, like with a strikeout and fly out to end the game after the White Hawks had notched three straight singles in the sixth.

“My rise, change up, hitting my spots has always been my strong suit,” Armbruster said. “If I keep working that, I feel confident.”

Armbruster already owns all the Falcons’ pitching records, with a good chunk of her senior season left to go. Following that, she’ll play at Minnesota State University, Mankato — a program that won the 2017 NCAA Division II national title.

First, Armbruster and the Falcons have some work to do. No longer the scrappy upstart, Faribault looks to see if it can get a battle-tested group of seniors another title.

“We knew going into this season the target on our back is so much bigger,” Armbruster said. “Everyone wants to beat us. So we just have to work that much harder than everyone; always stay one step ahead of everyone else. 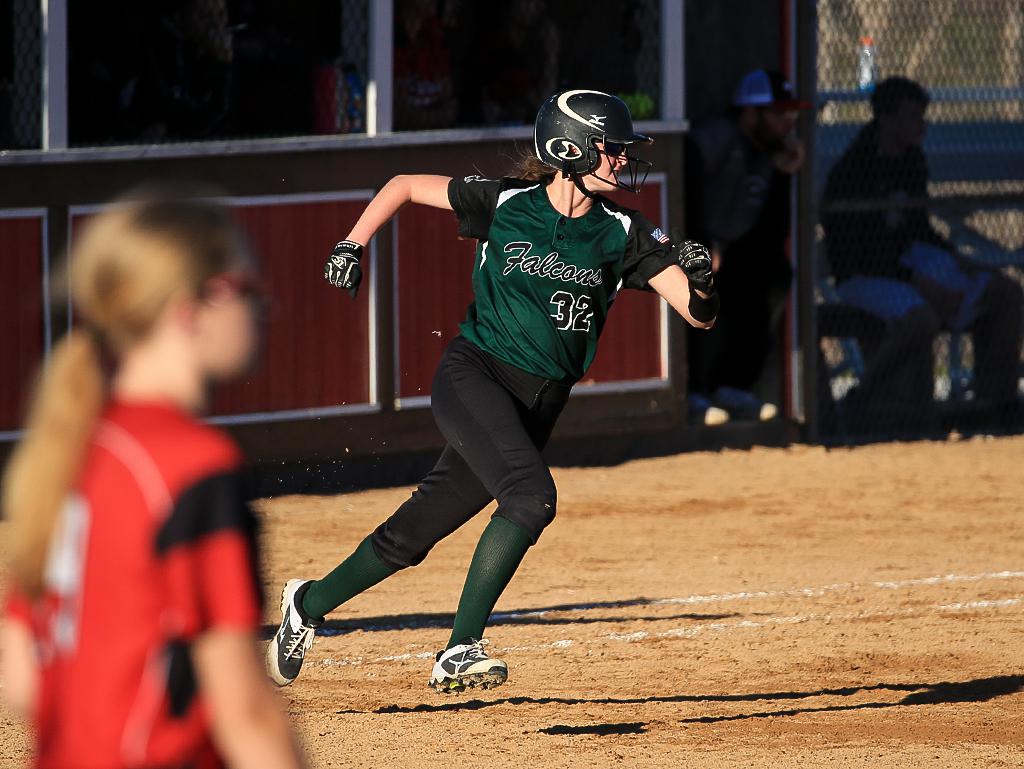 Zoe Morrissey (32) rounds first base on a three-run double, putting Faribault up 12-0 in the top of the sixth inning. The Falcons would hold the Whitehawks scoreless in the bottom of the inning to finish out the game. Photo by Cheryl Myers, SportsEngine

So far, so good for the reigning Class 3A champions.

Faribault cruised to a 12-0 non-conference victory at Mound Westonka in six innings on run rules Friday, behind a 10-strikeout performance by senior pitcher McKayla Armbruster.

The Falcons (5-0) scored five in the first inning and added three more in the second on RBI hits by Armbruster and Abby Van Ryn.

Mound Westonka (3-1) put two on with one out in the third inning, but a strikeout and groundout ended the threat.

Up 9-0 in the sixth, Faribault’s Zoe Morrissey had a pinch-hit, three-run double to make it 12-0, and Armbruster worked around three one-out singles in the bottom of the inning to end the game early. 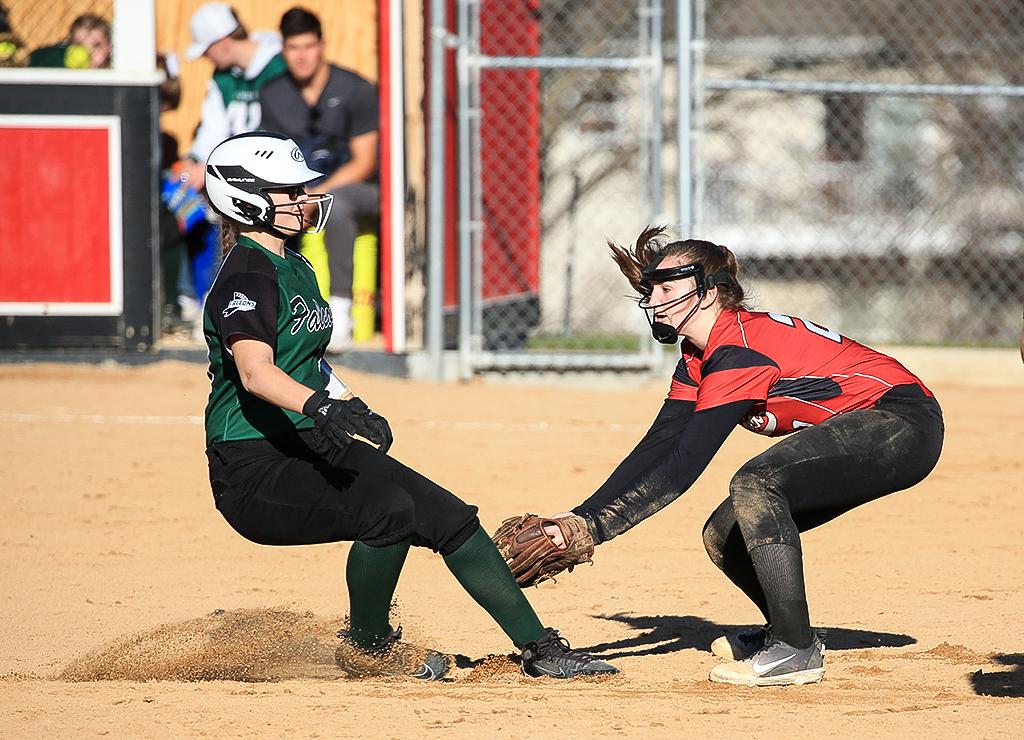 Mound Westonka's Melissa Drill (21) tags out a Faribault runner just off second base. Drill led the Whitehawks batting with two singles and went 2 for 2 on the night. Photo by Cheryl Myers, SportsEngine