Aimed at helping teenage girls develop fast-pitch skills without leaving for suburban programs, Club 612 provides a growing outlet that relies on volunteer coaches and is seen as more fun by its players. 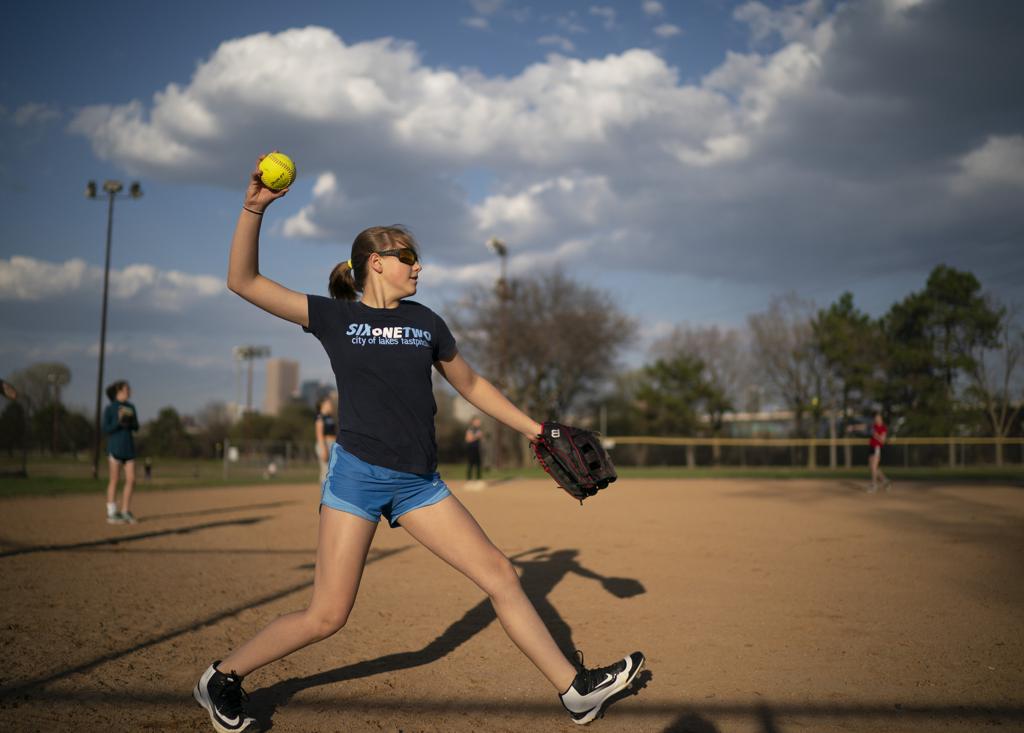 Emma Tomasko played catch with a teammate while warming up before a Club 612 U12 practice on April 25. Photo: JEFF WHEELER * jeff.wheeler@startribune.com

The choice was never there, even though Katie McCabe would have preferred something else.

Like so many other softball players growing up in the city, the Minneapolis Southwest catcher cut her teeth playing in the city Park Board system. When it was time to move up and move on, however, options were scarce. There was still a Park Board option, but the level didn’t jibe with the needs and desires of a player of McCabe’s caliber.

The other choice was to find a suburban club program. That, too, had significant drawbacks, including travel concerns, cost and a lack of acceptance.

“I played on suburban teams, and it wasn’t fun,” McCabe recalled.

McCabe’s predicament showed a need for a different option.

Thus began Club 612, a nonprofit fast-pitch softball organization designed for players who live or go to school in Minneapolis.

Now in its fifth year, Club 612 was spearheaded by Bruce Okeson, a south Minneapolis softball parent, and current Minneapolis Washburn coach Greg Berg to accommodate youth players looking to develop their softball skills without having to leave their hometown.

Club 612 President Mike Vanderscheuren said the genesis sprang from a tryout Okeson’s daughter had with a community club softball program in a distant suburb.

“He pulled Berg, who had experience in club softball in Burnsville and Hudson [Wis.] aside and said, ‘We need to do this in Minneapolis. Can you help me?’ ” Vanderscheuren said. “By the fall of 2015, we had six teams ready to play fall ball.”

It wasn’t easy getting players, lining up facilities, securing coaching commitments and getting the word out.

“It took a huge amount of effort,” Vanderscheuren said. “But there were so many players who were hungry for opportunities. The park program has a huge falloff at the 14U level. Thankfully, we had enough motivated parents to help make that happen.”

Now, Club 612 is on solid footing. The program, which costs $395 for a summer, had 131 players from 8U to 18U last year and already has 122 signed up for this season. Vanderscheuren expects numbers to approach 175 when the high school season is over.

Most important for McCabe, who will play collegiately at the St. Louis College of Pharmacy, “It’s taken my softball to a whole new realm. It’s way more fun.”

Laura Vonhof sat with her daughter Marina, 12, behind the backstop of a field at Bryn Mawr Park in Minneapolis, watching a high school game on the field, that would soon accommodate a Club 612 softball practice.

They didn’t mind the wait. The game, between Holy Angels and host DeLaSalle, had a strong 612 flavor. Both teams had players who played for the club outside of the high school season, and DeLaSalle coach Tom Heinecke also was Marina’s club coach.

The field was not fancy — no dugouts, no bleachers, no concessions — although it did have a permanent outfield fence.

“Minneapolis,” she said simply. “We didn’t want to go to the suburbs.”

That sentiment runs through Club 612, from its administrators through the coaches and players. Representing your home city carries a lot of weight.

DeLaSalle sophomore pitcher Liz Bjorkstrand comes from a softball-loving family, the youngest of three sisters who grew up with the sport. Until three years ago, Bjorkstrand played with a team from Bloomington. She considered it a necessary sacrifice to chase her dream of playing softball past high school.

“Like most sports, it could be a little cliquey,” she said. “In Bloomington, they had all these inside jokes and I was like, ‘Don’t understand, but whatever.’ They were some rough years, but I was playing for the sport, so I thought it was OK.”

Bjorkstrand discovered Club 612 four seasons ago and joined the program a season later.

“At first, I stayed at Bloomington because I wanted a more competitive team. But then I saw 612 go from a bad season to a team a little above .500 in one year,” she said. “I thought ‘OK, why not try it?’ ”

She found it to be a perfect fit. No more perceived favoritism, no more feeling like an outsider. This felt like home.

“In Minneapolis, we all come from different schools, so we make sure to include everybody. We get along so well and we’re so open with each other,” Bjorkstrand said. “I genuinely like every single girl on my team. This was the first time I could say that.”

“Softball is now my favorite since I’ve been with 612,” she said.

The program, a 501(c)(3) nonprofit, has a strong focus on limiting expenses and traditional fundraising efforts. It also relies heavily on volunteer coaches, who often come from the college ranks and trade compensation for gaining coaching experience.

Through intense efforts to land coaching expertise and thanks to a recent grant from the Minnesota Twins Community Fund, the coaching issue is in good shape.

But there are still bumps that need to be smoothed over. The biggest, Heinecke said, is having a place to call home. A lack of available fields and facilities through the park board system has been a consistent bugaboo. Often fields are double-booked or unavailable. Practices tend to jump around to available facilities. The fields used most often are at Pearl Park and Todd Park in south Minneapolis, which is also where the majority of players reside.

“It’s a constant struggle, dealing with the Park Board,” he said. “You can book a field, but you never know if it will be available when you get there.”

But as Club 612 builds its reputation, Heinecke sees a slow change in how it’s perceived by the Park Board.

“They see we’re not a daddy-ball program anymore,” he said, referring to softball’s past history of short-lived, father-run teams. “They just need to understand that what we’re doing is for the kids of the city.”

McCabe, one of those city kids, left Club 612 for a suburban program two years ago but missed it so much she came back.

“It wasn’t the family fit I was looking for,” she said. “You play with each other in the park system for years and then you go on to Club 612, it’s like a family. We have to support our city. I can’t wait to see where this program is in five years.”

Where: At various parks around the city.

Requirements: A player must either live in Minneapolis, have a parent with a permanent city address or go to school in Minneapolis.

What makes it unique: An opt-in, opt-out policy, which allows players freedom to pursue other interests. Many club programs lock in players for an entire year.

Cost: $395 for a full summer, although aid is available for those with need.