For the second time in six days, the Wolfpack defeated the Rangers to take a one-game lead in the league standings with a week remaining in the regular season. 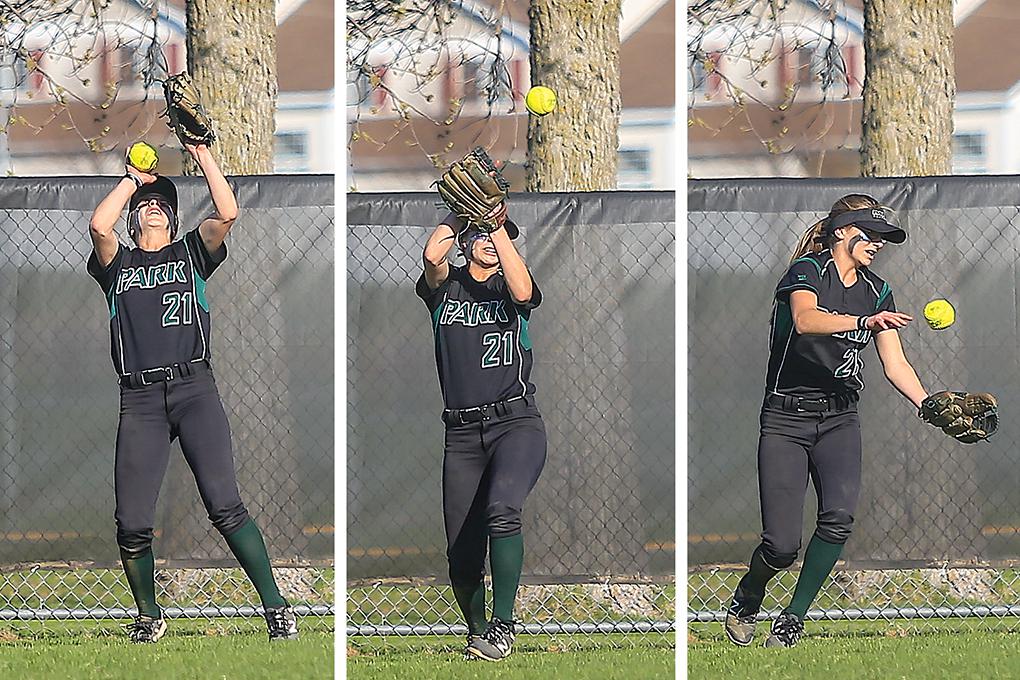 Park of Cottage Grove left fielder Corinna Loshek lost a sixth-inning drive in the sun, kept the ball alive with her throwing hand and made a juggling catch to end a Forest Lake threat. Photos by Mark Hvidsten, SportsEngine

Park of Cottage Grove sophomore Corinna Loshek insists she has not yet met a moment on the softball field that has been too big for her. On Tuesday, she passed each test Forest Lake, ranked No. 1 in the Class 4A coaches’ poll, set in front of her.

Loshek delivered with a two-out, two-strike RBI single in the fifth inning to break a 1-1 tie and then made a remarkable defensive play in the bottom of the sixth helping the No. 2-4A Wolfpack to a 2-1 Suburban East Conference victory.

Loshek’s juggling catch of a hard-hit ball off the bat of Rangers center fielder Autumn Reid to end the sixth inning was symbolic of Park’s performance. A little bit unsteady, but ultimately up to the challenge.

Loshek said she lost the ball in the sun. However, she found it in time to bat it with her throwing hand away from her face and back into the air, giving her the chance to relocate the ball and make the catch. Ally Goehner, pinch running after Ryleigh Eischen singled to leadoff the inning, was in position to score the tying run had Loshek dropped the ball.

“It was a little scary,” Loshek admitted. 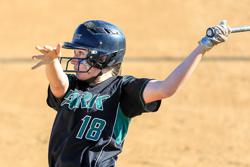 The Wolfpack made a number of uncharacteristic defensive miscues, including second baseman Peyton Langbehn’s misplay of a ground ball from the game’s first batter that led to the game’s first run and a 1-0 Forest Lake lead.

Park beat Forest Lake 1-0 on May 1 on its home field, and Wolfpack coach Bob Loshek knew runs would be hard to come by against Rangers senior Claire Bakkestuen, a Wisconsin-Platteville commit who entered the game with a 0.76 earned run average.

Senior Madi Meduna, who leads the Wolfpack with a .543 batting average, three home runs and 14 RBI, doubled with two outs in the third inning and scored the tying run when Loshek’s ground ball got through a Forest Lake infielder.

It was one of four errors for Forest Lake and it highlighted the Rangers’ season-long struggle to solidify their defense.

“Our defense has more room for improvement,” Rangers coach Sean Hall said. “We hit the ball very well and we pitch very well. We need to be better on defense.”

It was the difference in this game between the teams who have been sharing the top two spots in the coaches’ poll most of the season.

“In a game like this,” Bob Loshek said, "it’s gonna come down to who makes the fewest mistakes.”

Corinna Loshek’s game-winning hit dribbled just out of Bakkestuen’s reach and Loshek was able to reach base before the Rangers pitcher could recover.

The sophomore outfielder, who one pitch earlier hit a hard line drive just foul down the first-base line, said she was not feeling the pressure of the moment, just concentrating at the task at hand.

Bryanna Olson, like she did six days ago, tallied the win. She started and pitched five innings, giving up five hits and striking out five. Samantha Fohrman tossed the last two innings for the save.

Eischen had two singles, Bakkestuen reached base three times and Logan Anderson reached base on an error, an intentional walk and a double for Forest Lake. 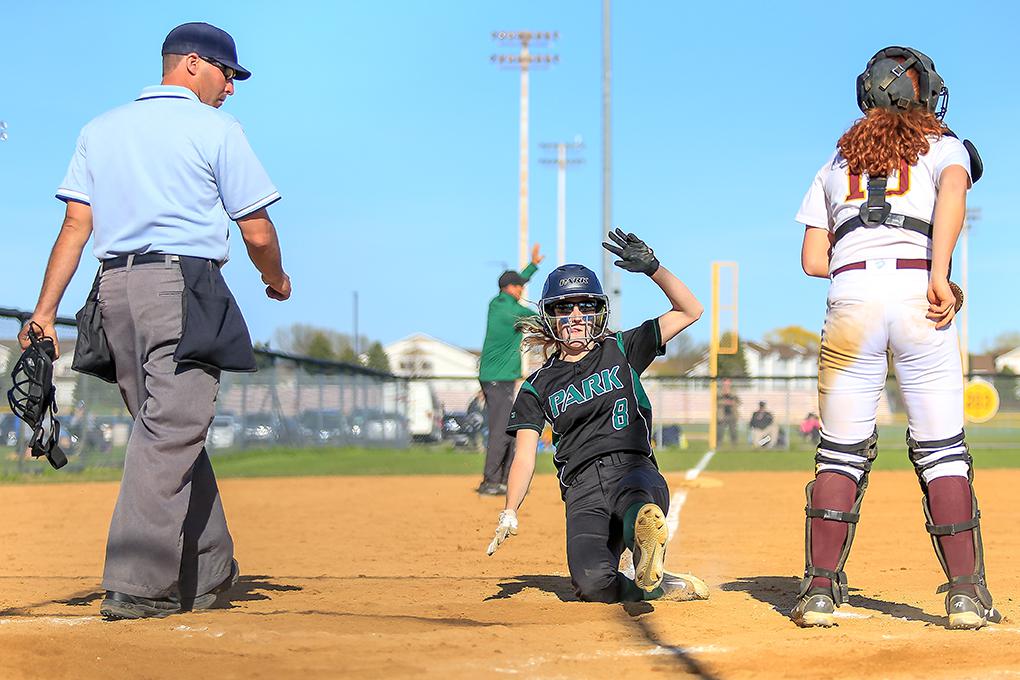 For the second time in a week, Park of Cottage Grove beat Suburban East Conference rival Forest Lake by a single run in a duel between the state’s top-ranked Class 4A teams.

Park’s 2-1 win on Tuesday at Forest Lake (9-2, 9-2) came six days after a 1-0 victory on its home field and leaves the Wolfpack, ranked No. 2 in the Class 4A state coaches’ poll, alone atop the conference standings.

Sophomore Corinna Loshek made two big plays in the late innings to help the Wolfpack (15-1, 12-1) win their ninth consecutive game. She beat out a two-out infield ground ball that allowed Hannah Schluetter to score from third to give Park a 2-1 lead in the top of the fifth inning, and then made a juggling catch near the left-field wall in the bottom of the sixth to end a No. 1-4A  Rangers’ threat.

Forest Lake pitcher Claire Bakkestuen turned in a solid performance but took the loss. She pitched a complete game, surrendering just four hits, two walks and she struck out seven.

Bryanna Olson threw five innings to notch the win for Park and Samantha Fohrman pitched the last two innings for the save. Olson also had a pair of singles, and Madi Meduna doubled, scored and drew an intentional walk.

Rangers catcher Logan Anderson reached base on an error and scored the game’s first run on Ryleigh Eischen’s single in the first.

With Tuesday’s win, Park moved ahead of both Forest Lake and No. 5-4A East Ridge (11-2, 10-2) in the conference standings. The Wolfpack have an opportunity to gain more ground on Wednesday when they play at East Ridge. 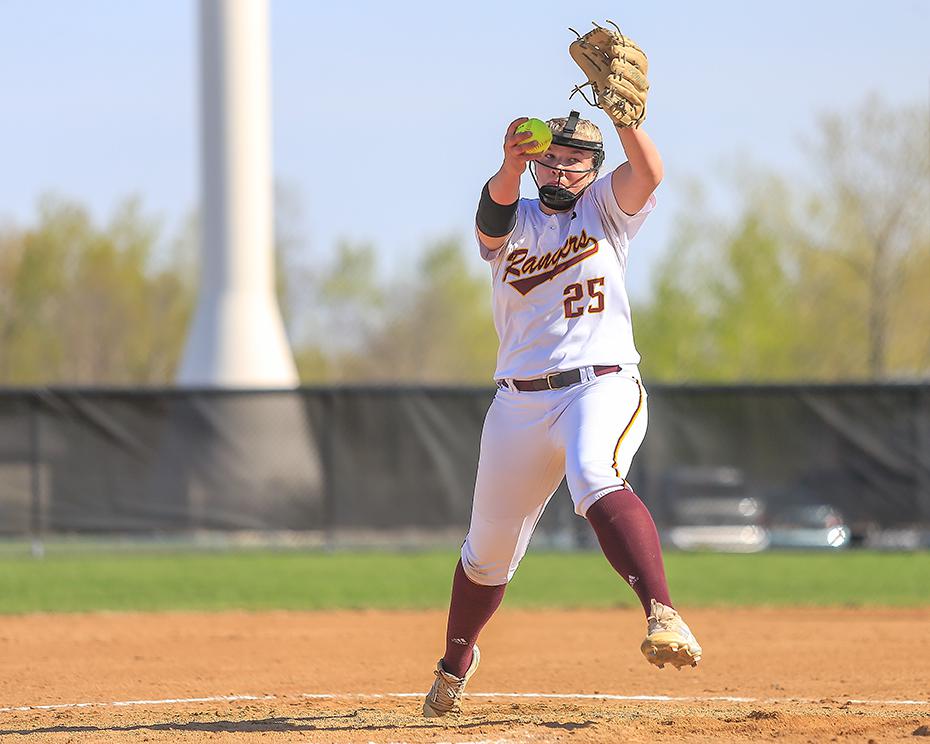