The Crimson senior, who struggled to make contact as U14 player, is hitting .525 with a metro-leading 14 home runs. And now she's making opposing hitters do the whiffing. 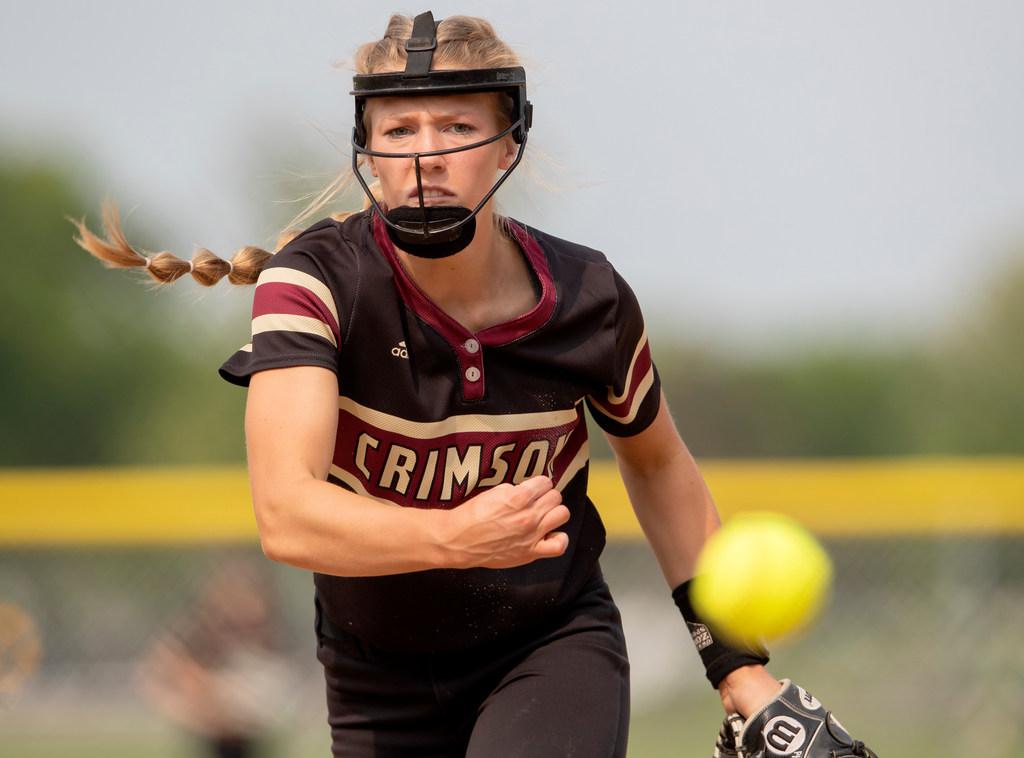 “I have one of these personalities where, if I get an idea in my head, I’m going to achieve it,” Dueck said. “I think that’s why I’m good at softball. It’s something that I truly love.” Photo: CARLOS GONZALEZ • cgonzalez@startribune.com

Twenty-seven strikeouts. In a row. Not even a foul tip to spark a wisp of confidence.

For most, striking out 27 consecutive times would have been a message that it’s time to try something else. For Maple Grove pitcher Ava Dueck, all it did was strengthen her resolve.

“It was first year of 14U [softball]. It was horrible. There wasn’t even a foul ball here or there. I just swung and missed,” Dueck said. “I finally got a hit, a single, in the last game. It was a pathetic hit, but it was a hit. Feeling that success, after 27 strikeouts in a row, pushed me to want to keep going. It made me know I was capable of doing it.”

Fast forward five years, through day after day of long workouts and longer training sessions, and a serenade of whiffs still follows Dueck. Only now, they’re coming from the bats of opponents, to the tune of 199 strikeouts while building a 17-2 record and a 0.96 ERA.

And her bat? Contact is not only regular, its rock-solid. Dueck is batting .525 on the season with a metro-leading 14 home runs and 34 RBI.

Dueck’s excellence as a pitcher and at the plate has led to Maple Grove’s fourth state tournament appearance in six seasons and eighth overall, and earned her the distinction of being the 2019 Star Tribune Metro Softball Player of the Year.

An honor that at one time seemed improbable came about thanks to Dueck’s driven nature. According to her parents, Judah and Tara, Ava showed a passion for softball long before her fateful streak.

“She won the state tournament for 10U slow-pitch back when she was 9,” Judah recalled. “She was the pitcher and she just fell in love with softball immediately.”

Nearly everything she did from that point on was geared toward improvement.

“Before I had [club softball] commitments I was paying for, I was out hitting with my dad,” she said. “When I didn’t have a catcher around, I’d make a duct tape bull’s-eye on a tree. It was the worst return system ever. I’d use, like, 15 balls.”

With such hyper-focus as her guide, it’s no surprise Dueck has elevated her game to elite status. A third team All-Metro selection as a junior, she migrated last summer to Midwest Speed, Minnesota’s top club softball program, in search of another level to her game.

“She’s always had that go-get-it mentality,” Tara said. “Midwest Speed offered so many ways to improve and different types of training. She was going to everything she could get her hands on.”

Dueck never saw it as a sacrifice.

“The five-hour practices we have in the summer every day? I’d rather go do that than sleep in. Or I’d rather go hit on my afternoon off than sit at home,” she said.

Crimson coach Jim Koltes noticed the difference in Dueck when the team came together before this season.

“She had a great year last year, but it’s night and day difference this year,” Koltes said. “It’s her stamina and her strength. If you look at her body composition and make up, she is all lean muscle.”

As much as Dueck’s commitment to physical improvement is a hallmark of her game, it’s her mental makeup that completes the picture. She doesn’t just play softball, she lives it. There is no part of the game she hasn’t studied or developed.

“As much as her pitching and her hitting helps us, we need her overall leadership,” Koltes said. “She’ll say ‘We need to focus now’ and every kids hears it and focuses.”

It all comes back to her love of the sport. When she discovered softball, she uncovered a passion.

“I have one of these personalities where, if I get an idea in my head, I’m going to achieve it,” she said. “I think that’s why I’m good at softball. It’s something that I truly love.”

Tag(s): Around The State  Maple Grove