The Crimson's 3-2 victory came after the defending champion Ponies loaded the bases and scored twice but couldn't plate the game-tying run. 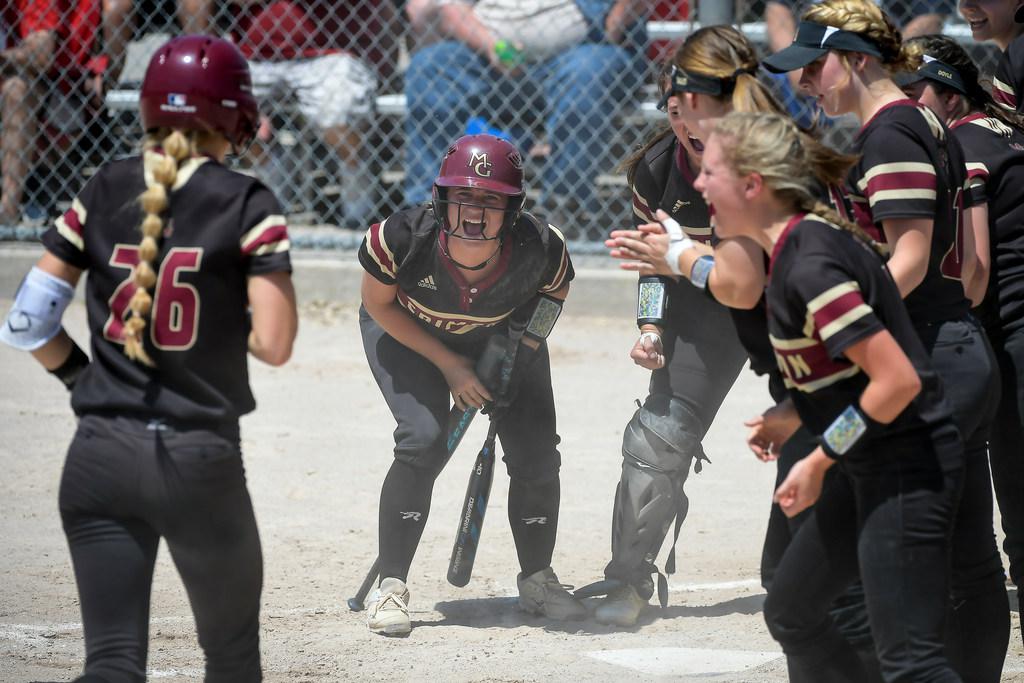 Maple Grove teammates celebrated at the plate after their ace pitcher, Ava Dueck (26), hit a home run against Stillwater in the bottom of the first inning. Photo: Aaron Lavinsky ¥ aaron.lavinsky@startribune.com

It was the bottom of the seventh inning and Maple Grove was clinging to a one-run lead. Stillwater’s Morgan Wohlers hit a sharp ground ball that appeared headed toward centerfield.

The bases were loaded and there were two outs, so the runners were moving. If Tomashek doesn’t make the play, a run scores and the Class 4A title game is tied.

But Tomashek, a senior who will play at Winona St. next year, reacted like the heady veteran she is. She gloved the ball, reached out and tagged Stillwater’s Ani Bell as she was running past.

And just like that, Maple Grove had won the Class 4A state championship, defeating 2018 champion Stillwater 3-2. The explosion of emotion from the Crimson was as much from relief as it was from joy.

Maple Grove had gone into the inning with what looked like a comfortable 3-0 lead. The ending, after the Ponies loaded the bases twice and scored two unearned runs, was anything but comfortable.

“It was nerve-wracking,” said Dueck, who augmented her third victory of the tournament with two base-hits, including a first-inning home run. “But I knew we were going to pull it out. We’ve always had a knack for getting out of tough situations.”

When she corralled the deflected ball, Tomashek reacted instinctively.

“Right when I saw it go off her glove and come to me, I just reached out and tagged the runner,” Tomashek said.

For a moment, she wasn’t sure she had done the right thing.

“I had a bit of a panic attack because I tagged her with my glove first and then I got her out with the ball,” she recalled. “When the umpire called her out, I just lost it. We won.”

Tomashek’s play wasn’t her only big contribution. Her two-run single in the fifth inning had given the Crimson a 3-0 lead. It proved to be even bigger than it appeared at the time when Stillwater rallied in the final inning.

“We had a chance to win,” Stillwater coach Bob Beedle said. “We had a couple earlier chances in the game to break through and put a little pressure on them. But you have to tip your hat to Maple Grove. They had a terrific pitcher, and she’s also a terrific hitter.”

It was the first championship-game victory for Maple Grove after three previous losses in a state final. To Crimson coach Jim Koltes, it felt even better than he thought it would.

“Jade made that tremendous last out and it was like a weight being lifted off of you,” he said. “It was a feeling of ‘Finally, we got one.’ ”