Most improved spring sports teams in 2019

We chose the squads that we think showed the most improvement from 2018 to 2019 in baseball, softball, and girls' and boys' lacrosse. You determine which was best. 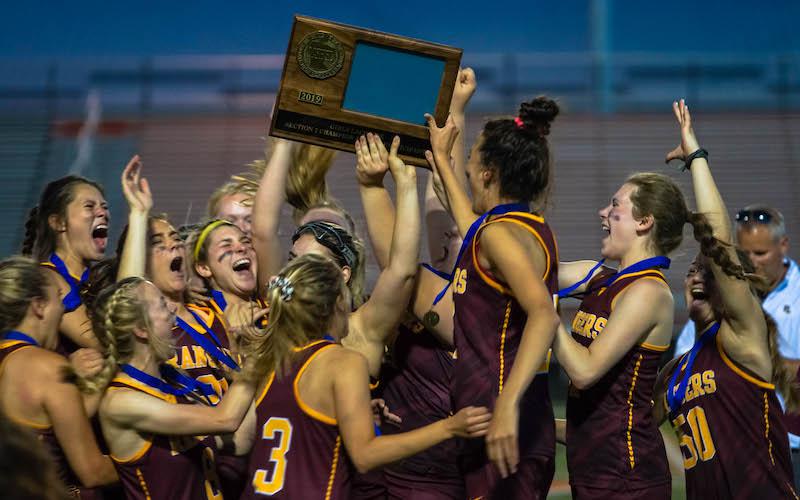 Forest Lake girls' lacrosse celebrated its first Section 7 championship — and the trip to state that came with it — last season. The Rangers' rise was one of our candidates for the most improved team in spring 2019. Photo by Korey McDermott, SportsEngine

Yep, we're still here, daydreaming of when we can watch organized sports teams once again take the field.

For the time being we present yet another article in a series of retrospectives the Hubs are producing to help fill the void left by the cancellation of the high school spring sports season.

Below is an interactive look at our picks for the most improved teams from the 2018 to the 2019 season. We selected a minimum of one team from each of the spring sports we'd normally cover and provided some analysis so that you don't pick up on the fact we're just throwing darts at a map to make our selections.

Did we leave any teams off the list that deserve to be mentioned? You be the judge and comment below.

Read the selections and then vote in the poll below, where we've included an option for "Other." It's there for you to check if you think there's another team worthy of spotlighting, and to further your argument, please opine in the comments section below.

The only ground rule: Keep it civil! We don't mind if you disagree with our picks, or those of other posters, but we do mind if your comments cross the line.

Some Suburban East Conference fans felt the league was slighted when the Hub didn’t name it as the best girls’ lacrosse conference of the past three years — it lost out to the South Suburban Conference by a razor-thin margin — but hopefully they will be pleased that the league is getting its due this week with our choice of Forest Lake girls’ lacrosse as the most improved team from last spring.

The Rangers of the last decade collected .500 or above records like an inept scout earns merit badges. Between 2011 and 2018, Forest Lake amassed just three winning seasons, while last year’s 8-7 campaign equaled the team’s highest number of victories in the last eight years.

Success in conference play was nearly as elusive, with the program getting lost in the woods of Suburban East play, where it went 0-7 twice and won only one game in two other seasons. Forest Lake also never placed higher than fourth (2018) in the league title chase — one that often found established programs such as Stillwater, Cretin-Derham Hall, Park of Cottage Grove and East Ridge reaching the end of the path first.

But in 2019, the program reached a higher rank with a performance worthy of a multitude of merit achievements. The young Rangers not only surpassed 2018's victory total, they nearly doubled it by going 15-3 overall (a seven-game improvement) and were a contender for the league title for the first time.

Then-juniors Taylor Glumack and Bailey O’Donovan combined with then-freshman Brooke Glumcak to power a potent offense that not only accounted for 173 goals (10th best in the state) and had nine players finish the season with double-digit points in leading Forest Lake to a 12-1 regular-season record and a second-place finish in the highly competitive Suburban East with a 9-1 mark.

A 13-8 loss to Stillwater early in the season prevented the Rangers from making their first state tournament appearance with a perfect record, yet they still entered the event on an 11-game winning streak — and as first-time section champs — thanks to a 7-6 overtime victory against Champlin Park in the Section 7 title game. Forest Lake nearly extended the streak to 12 in the state quarterfinals against third-seeded Breck, where the unseeded Rangers lost a nip-and-tuck tussle 10-9.

Taylor Glumack finished the year leading the Rangers with 44 goals and 56 points, while O’Donovan had 37 goals and 54 points. Brooke Glumack added 24 goals and a team-best 18 assists.

Only two South Suburban Conference teams finished the last regular season with double digit victories. Can you guess which ones? State champion Prior Lake is a no-brainer, but the other may be a surprise.

Shakopee also won 10 games, which was more than longtime powerhouses Eagan, Lakeville North and Rosemount, and finished the year with its most victories in a season, going 11-4 overall — an improvement of six wins over its 5-8 record from the season before.

The Sabers went 6-3 in conference play, good enough for fourth place in the standings in what was (by our own account) the most competitive league last year. That performance pushed Shakopee into the state coaches poll for the first time and ultimately to the program's highest position at No. 6 in the final rankings of the year.

The turnaround was a result of a prolific offense that totaled 208 goals, a trend the team started early with 50 goals in its first two games. Needless to say, both were victories. The team finished the regular season with eight players totaling double-digit points, including six with 30 or more. Senior Cabe Maskevich outpaced the group with 77 points (35 goals, 42 assists).  Ethan Mostrom added 51 points (29 G, 22 A) while Ronnie Gunter Jr. had 33 goals and Sam Hallett scored 27 times.

Shakopee couldn’t turn the success into a long postseason run, but for the second consecutive year, the team made Eden Prairie uncomfortable in a section showdown. The Sabers kept the eventual Section 2 champion Eagles within striking distance in a 14-9 semifinal loss, which was just a year after nearly knocking off their section nemesis in an 8-7 quarterfinal loss.

Red Lake Falls softball takes flight after a down year

Our first of two softball programs to snag most improved honors is Red Lake Falls, which posted 11 more wins in 2019 than it had the year prior.

After clinching a winning conference record and earning a trip to the Class 1A state tournament in 2017, Red Lake Falls took a slide the next season, going 8-8 in the regular season with an Agassiz Valley Conference record of 5-6 — good enough for a middle-of-the-pack finish in the league standings.

In the 2018 postseason, the Eagles were eliminated from the Class 1A, Section 8 tourney in four games, with Ada-Borup finishing off the Eagles.

After their one-year crash to mediocrity, Red Lake Falls more closely resembled its 2017 squad a year ago. The Eagles went 17-3 in the regular season — a phenomenal improvement of nine victories — and lost just two league games to secure another conference championship banner. The Eagles didn’t return to the state tournament last year, but they did go farther in the section playoffs, winning two more postseason contests than they had the prior year and they got revenge against Ada-Borup. 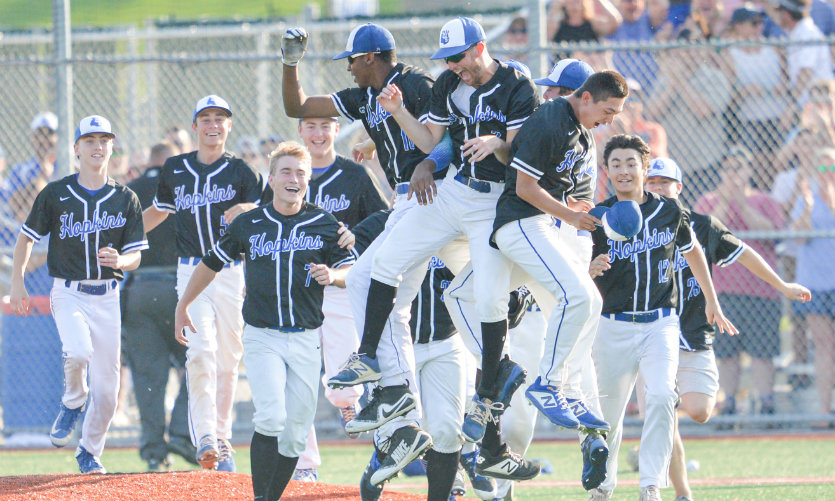 Hopkins baseball claws its way out of Lake Conference basement

Prior to the 2019 season, Hopkins hadn’t made a state tournament appearance since 2012, nor had it been much of a factor in the Lake Conference standings since 2013, with the Royals routinely meandering or being out of contention altogether.

The Royals finished tied with Wayzata for third place — in what was then a five-team league — in the 2018 Lake standings and had an overall record of 10-10 in the regular season. The Royals lost six of their final seven games of the regular season that year, then limped into the Class 4A, Section 6 playoffs and dropped two of three contests, ending their season in a defeat to Wayzata.

The Royals flipped the script a year later, especially late in the season. Winning six of their final eight regular-season games, the Royals secured a 14-6 overall record — a four-game improvement from the season prior — and the Lake crown. Hopkins went undefeated in the section playoffs, knocking off Wayzata in the Section 6 finale to claim a spot in the Class 4A state tourney, where the Royals lost to Rogers in a quarterfinal matchup.

When combining regular-season results with postseason runs, Hopkins improved from an overall record of 11-12 in 2018 to 18-7 a year ago — an improvement of seven total games, in addition to adding hardware for winning conference and section crowns.

The Lions of St. Croix Prep found their roar a season ago, as they fought to a 16-5 overall record with just one conference loss — making them champions of the Minnesota Classic Athletic Association.

St. Croix Prep hadn’t had as much bite the year prior, when the Lions went 11-8 overall and won just two league games, resulting in a sixth-place finish in the conference standings.

While a five-win improvement from 2018 to 2019 may not seem all that impressive, a closer look at how the team performed in the regular season the last two seasons sheds more light on the team’s upward trajectory.

St. Croix Prep won just seven games before postseason play two years ago, compared to 15 last season. Where the stats get muddled is in postseason performance, as the Lions had more success in Class 2A, Section 4 playoffs two years ago, winning an additional three games. One of the Lions’ postseason losses in 2019 came against Concordia Academy, which went on to win the section.

In spite of stumbling to the finish line in last season's section playoffs, the Lions' eight-game turnaround in the regular season cannot be ignored, making St. Croix Prep one of the state's most improved teams from 2018 to 2019.