Stillwater softball reunites after teammates make most of lost season

Allison Benning worked on her top-flight pitching. Morgan Wohlers used the down time to play more hockey. Now they and their Ponies teammates are glad to be back in each other's company, playing for their school. 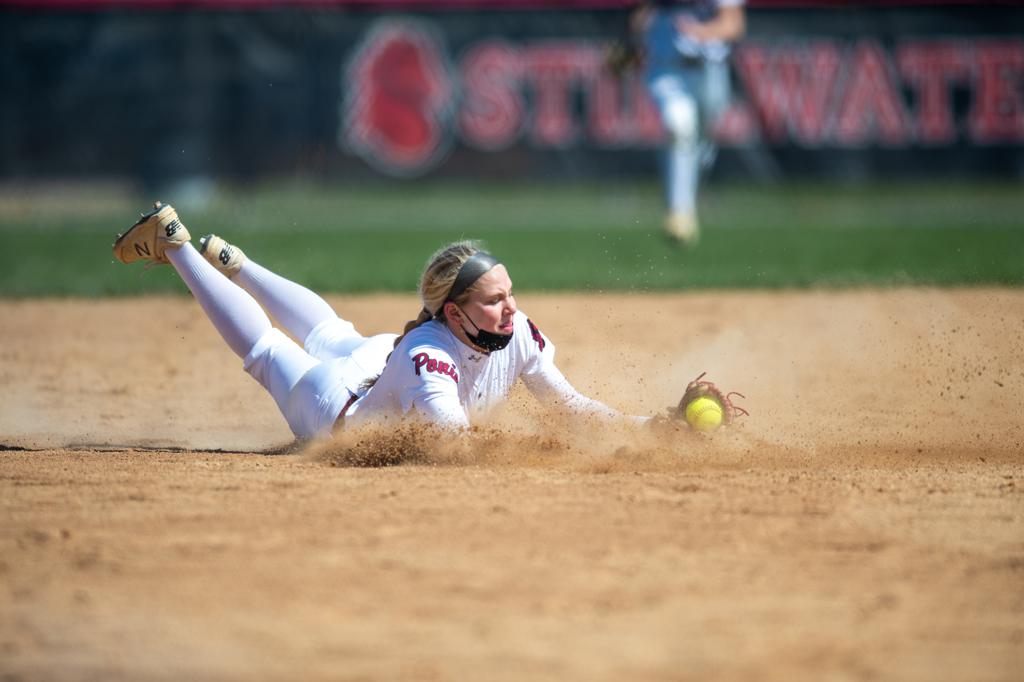 It wasn’t the actual softball that was missed when the 2020 high school spring sports season was canceled.

At Stillwater, it was everything that went along with it.

With the 2021 season well underway, those who missed out on playing for the Ponies last year are set firmly on the immediate future, intent on using the lost season as both motivation and a path of appreciation.

Last season was supposed to yield another strong Stillwater run a a state championship. The Ponies jelled in the postseason in 2018, winning the Class 4A title with nine consecutive victories after a 7-12 regular season. A year later they came within a run of winning their second consecutive championship.

With many of those players back in 2020, another dash at a title was expected.

The sport, however, did not. Club softball remained. For most of the Stillwater players, that became their focus.

“They all play softball for club teams,” said new coach Angie Ryan, who took over this season, replacing longtime coach Bob Beedle. “It was playing with their friends and the kids they go to school with that they missed.”

Ponies senior Allison Benning is one of the top high school pitchers in the nation. Softball is not just her favorite sport, it courses through her veins. She’s worked with numerous private coaches to develop her skills, which include a fastball that has reached 69 m.p.h. When the high school season never materialized, she simply found other avenues to satisfy her softball needs.

What she lacked was an end goal. What’s the sense in playing a game competitively without a chance to determine who’s best?

“Playing in the postseason was what I missed the most,” said Benning, who’s already dominating in the circle this season. She’s 3-0 with a no-hitter on pause, as Stillwater’s season-opener was suspended in extra innings.

“That’s what I look forward to,” she said. “The intensity is turned up and I like playing in big moments.”

Teammate Morgan Wohlers, the Ponies’ starting shortstop, had a distraction last spring as well. She’s a five-year varsity veteran in two sports, hockey and softball. While she loves both sports, she believes hockey is her future. When softball season was canceled, she found more time to spend on the ice last spring, a time usually reserved ground balls and line drives.

“Usually, when hockey is over, I’m depressed for about a day, then I flip the switch and get excited for softball,” Wohlers said. “Last year, I just worked out and hit a little of a tee. I played more hockey.”

It’s not that Wohlers takes a ho-hum approach toward spring ball. One of her greatest memories was of knocking out an RBI base-hit in the 2018 championship game.

“Softball is super-important and I’ve loved playing it with the girls I’ve grown up with,” Wohlers said. “I really don’t have a favorite sport. Whatever season we’re in, that’s my favorite.”

After this season, Benning will be off to play for her summer team, which is based out of Kansas City, then head west to start her college career at the University of Oregon. Wohlers expects to play hockey at Hamline, knowing her softball career is over.

For both, that makes this somewhat brief senior season, which will end with a shot at a state tournament appearance, all the more important.

“I couldn’t wait for this season,” Benning said. “I was anxious and really excited to work hard with my teammates and hopefully make a long, deep run in the state tournament.

Said Wohlers: “This will be my last time playing on my softball team. It’s crazy. I’ve been playing since kindergarten. I want to go out working hard and having fun with some of my best friends.”