Lakeville North walks off in eighth inning to defeat Rosemount

The Panthers' McKinley Malecha hit a walk-off single in the eighth inning to deal the Irish their first loss of the season. 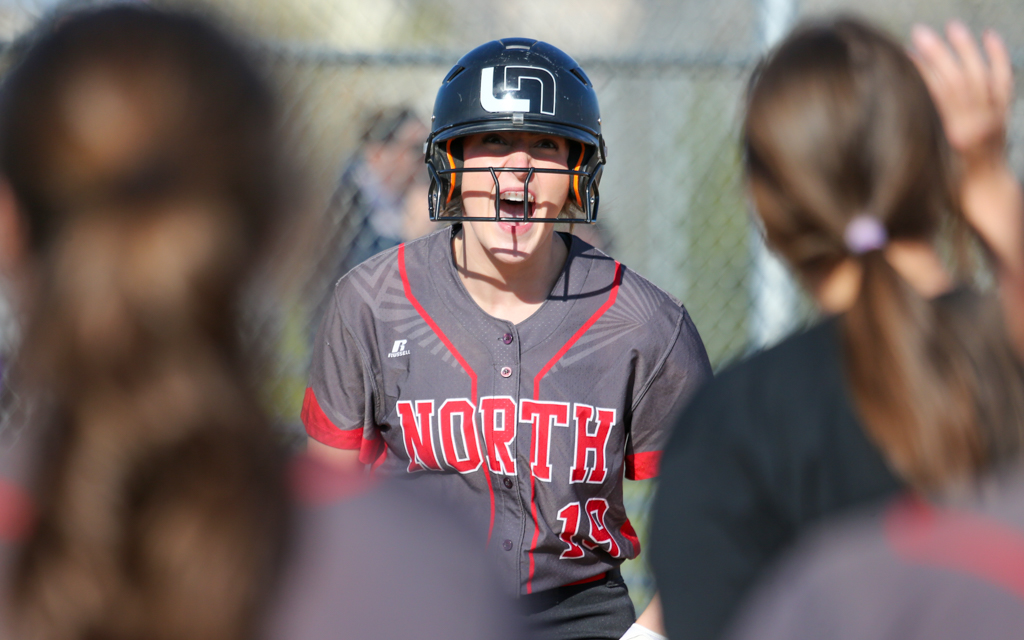 Lakeville North's Jordan Ahrenstorff (19) celebrates her game-tying home run in the bottom of the seventh inning against Rosemount Wednesday evening. The Panthers handed the Irish a 2-1 loss in eight innings. Photo by Jeff Lawler, SportsEngine

A little inside knowledge can make all the difference.

Rosemount pitcher Jessa Snippes had left the Lakeville North offense guessing most of Wednesday. But not the Panthers’ McKinley Malecha.

Malecha, a catcher committed to Nebraska, timed up a riser perfectly against her former summer ball teammate, sending it back to center field for a walk-off single to lift Lakeville North to a 2-1 win in eight innings in Lakeville.

The Irish (5-1, 5-1) won their last three games by a combined 28-1 score. They never trailed Wednesday until the last play. Snippes retired 16 batters in a row from the end of the first inning through the sixth, with 11 of her 16 strikeouts coming in that span.

Snippes, a sophomore, also went 3-for-4 at the plate with a RBI single in the fifth inning against Panthers senior pitcher Lexi Haglund. Izzy Yahr came around to score after doubling for Rosemount’s lone extra-base hit.

“Jessa is great. She’s super lighthearted, so I think that’s a part of why she’s so dominant,” said Rosemount coach Tiffany Rose. “She doesn’t let a lot of things get to her, she just goes out and does her thing. She’s really doing well and I’m sure this was hard for her, but she dominated.”

Haglund went the distance in the circle for Lakeville North (4-2, 4-2) with nine strikeouts, while allowing seven hits, three walks and a hit batter. She didn’t sail quite as smoothly as Snippes, as at least one runner reached base in six of eight innings. Haglund threw strikes and relied on a tidy defense behind her. A diving catch made by Panthers shortstop Alyssa Bowersox saved a run with two outs in the eighth.

“Lexi threw well. Her offspeed pitches were working very nicely,” said Lakeville North coach Mike Schultz. “She was in control, I’d say, 95% of the game. It was a good hitting club we held to one run. I’m pretty proud of her.”

Haglund was on the hook for the loss in this South Suburban Conference matchup until Jordan Ahrenstorff stepped to the plate. The No. 3 hitter in the lineup shook off an 0-for-2 start by hitting a towering solo home run to right field with no outs in the seventh that forced extra innings.

It ended Snippes’ retired batter streak and gave the Panthers a much-needed shot of life.

A one-out walk in the bottom of the eighth by No. 8 hitter Kristin Thomas and a single by Ari Loesch, in her second at-bat off the bench, set the table for Malecha’s two-out knock.

Lakeville North had big aspirations for a 2020 season that was called off due to the COVID-19 pandemic. But the window of opportunity could still be open for the Panthers. Knocking off a Rosemount squad that’s off to its best start since winning a state title in 2006 is a confidence builder after a pair of losses leading in.

Schultz described his roster as “the closest knit team we’ve had.” Malecha is also a believer in the group’s intangibles. 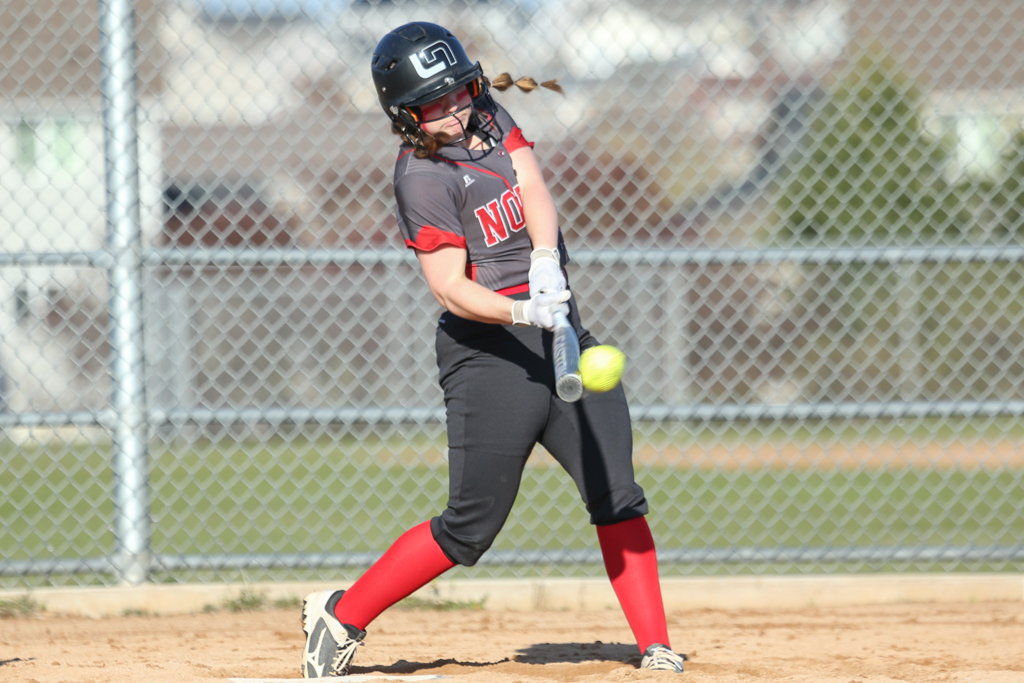 Lakeville North's Arianna Loesch connects for a single in the bottom of the eighth inning against Rosemount Wednesday evening. The Panthers defeated the Irish 2-1 in eight innings in Lakeville. Photo by Jeff Lawler, SportsEngine

Lakeville North found its hitting stroke just in time to hand Rosemount its first loss of the season Wednesday.

A solo home run in the bottom of the seventh inning by Jordan Ahrenstorff tied the game at 1 and McKinley Malecha smacked a walk-off single in the eighth inning to win it 2-1 for Lakeville North (4-2, 4-2) at home.

After surrendering a walk and a single in the first inning, Snippes retired 16 straight batters until Ahrenstorff’s home run. Snippes also went 3-for-4 at the plate in the No. 3 slot for the Irish (5-1, 5-1) with a RBI single to give her team a 1-0 lead in the fifth inning.

Haglund, meanwhile, struck out nine batters, gave up six hits, two walks and a hit batter en route to pitching a complete game for the Panthers.

Malecha led Lakeville North with a 2-for-4 hitting effort. 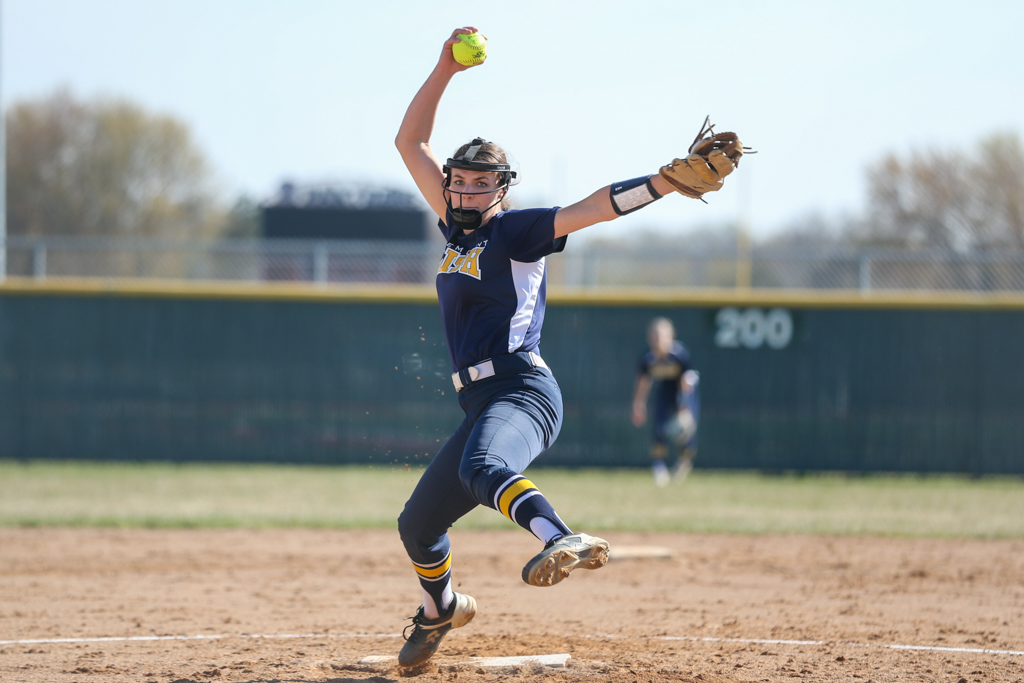 Rosemount's Jessa Snippes (18) delivers a pitch during the second inning of Wednesday evening’s game against Lakeville North. The Irish fell to the Panthers 2-1 in eight innings. Photo by Jeff Lawler, SportsEngine