Sisters Chloe and Heidi Barber broke a 2-2 tie with a pair of home runs to help the Bears defeat the Raiders. 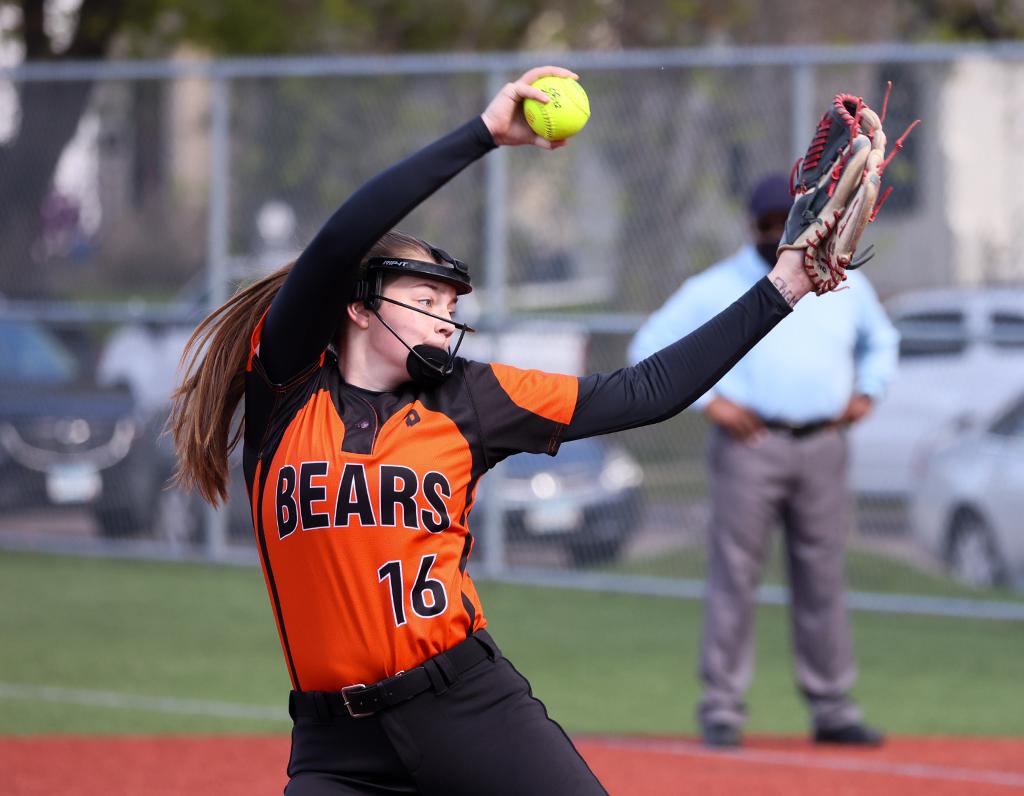 There are not many sophomores who get the chance to be the leading pitcher for a big program. Chloe Barber is one of them.

What makes her situation even more unique is the fact she’s getting this opportunity with her younger sister, freshman Heidi Barber, who plays catcher across from her.

Though Heidi is just a year younger than her sister, the two had not recently played together on the same team.

Both Barber sisters admitted that there has been an adjustment period for them as batterymates this season and even joked about some disagreements about which pitch should be thrown by Chloe.

“We’re getting along,” Heidi Barber said. “I think it’s fun because we connect with each other. We know how they’re feeling. We understand each other’s personalities.” 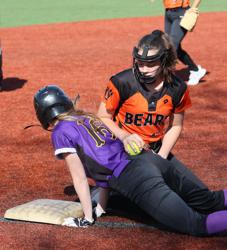 Bears coach Kaity Wightman has been impressed with how the two have worked together.

“They’re completely professional,” Wightman said. “They’re both gamers and absolutely love softball. They are very smart for the ages that they are.”

While the two work together, it’s easy to see the calm demeanor the sisters bring to games no matter the moment.

“They’re definitely an emotional balance to the team,” Wightman said. “They definitely show up to compete.”

In the fifth inning, the Bears, ranked No. 5 in Class 4A by the coaches’ association, had one of those tougher moments. Ahead 2-0, Cretin-Derham Hall (3-9, 3-9) scratched across a pair of runs to tie it up.

White Bear Lake (11-3, 10-2) got out of the jam without further damage thanks to a pair of strikeouts from Chloe. When the Bears went to bat in the top of the sixth inning, Heidi got the first crack at putting White Bear Lake ahead again with a long ball over the fence in right center field. After her, it was Chloe’s turn to smack a homer. The back-to-back blasts gave the Bears a 4-2 lead they’d never relinquish.

The Barbers both said after the game their approach was to just get on base.

“Our dad has always been waiting for a back-to-back like that,” Chloe said. “I did have to kind of hit it a little bit farther.”

In the final two innings, Chloe allowed just one hit while striking out four of the final six hitters she faced to pick up the win.

Wightman said she wasn’t surprised to see the Barbers take matters into their own hands, as it’s been something that has happened throughout this year.

“They’ve been our offensive leaders all season,” Wightman said. “They’re competitors. If there’s any time for somebody to step up, they’re always there to do it.” 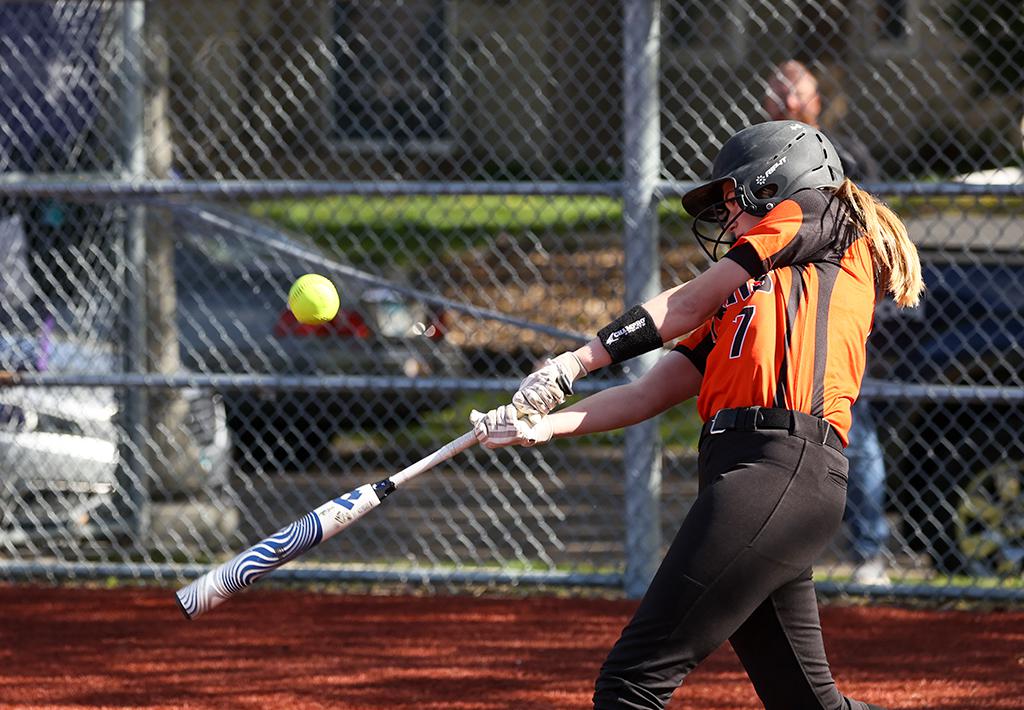 Freshman catcher Heidi Barber connects for a single in the fourth inning. Barber added a home run in the sixth inning to lead White Bear Lake to a 5-2 win over Cretin-Derham Hall. Photo by Cheryl A. Myers, SportsEngine

The Bears (11-3, 10-2) got a 2-0 lead scratching a run across in each of the third and fourth innings. Second baseman Mik Stowe started the scoring in the third with an RBI single and finished the game 2-for-4 with an RBI and a run scored.

Heidi Barber, a freshman catcher for the Bears, was responsible for the next two runs from White Bear Lake, ranked No. 5 in the Class 4A coaches’ poll. In the fourth inning, she scored on a single by Jordyn Meyer. Then her long ball in the sixth put the Bears ahead 3-2. She finished 2-for-3 with a pair of RBIs and two runs scored.

Chloe Barber was formidable offensively and from the circle for White Bear Lake. At the plate, she went 1-for-4 with a home run, just moments after her younger sister knocked her homer. The sophomore pitcher struck out 13 batters, allowing three hits and two runs in seven innings to pick up the win.

Cretin-Derham Hall’s best chance at a potential upset came in the bottom of the fifth inning, when the Raiders (3-9, 3-9) plated two runs while picking up their first two hits of the contest against Chloe Barber. Senior right fielder Ella Klein smacked in the first run for Cretin-Derham Hall with a single. She finished 2-for-2 with a walk, two singles and an RBI. 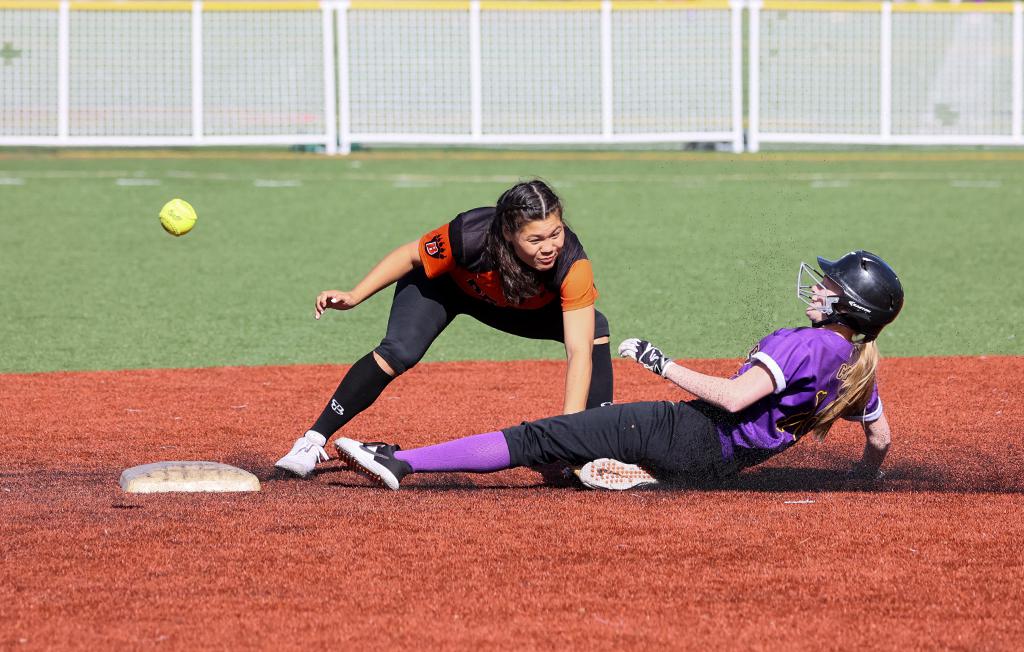 Cretin-Derham Hall's Ryan Courtney slides into second base safely, setting up the first of two runs in the fifth inning. The Raiders fell 5-2 to the Bears on Friday night. Photo by Cheryl A. Myers, SportsEngine