Kal Harris tallied 12 strikeouts for the Lakers, who have a chance to clinch the Minneapolis City Conference title on Thursday. 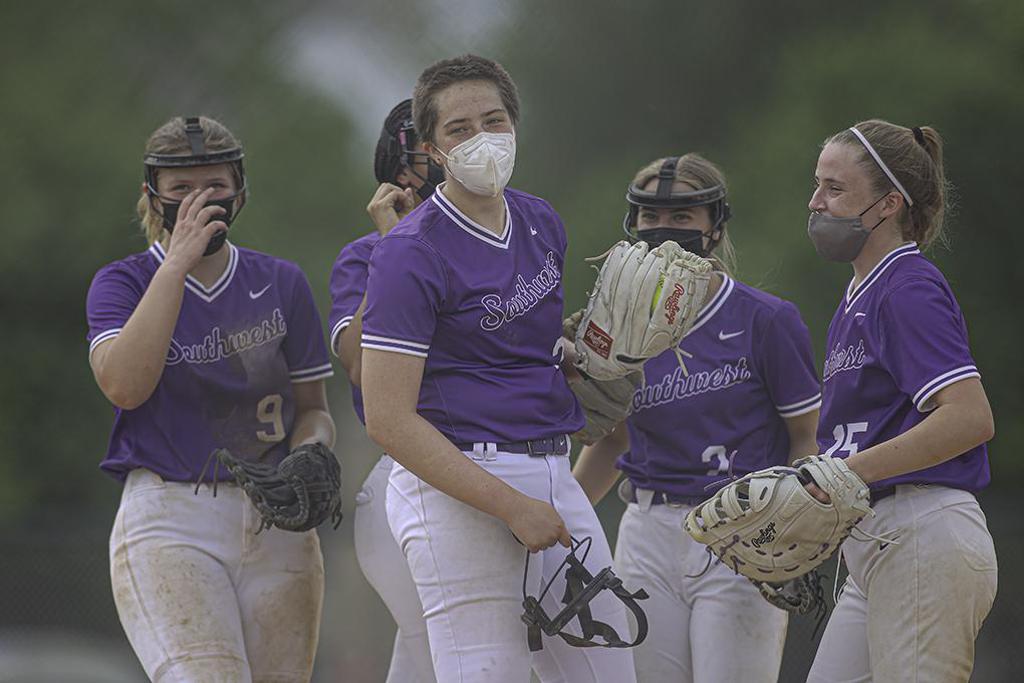 Minneapolis Southwest players gathered at the pitching circle to help Kal Harris celebrate their 100th strikeout of the season. Harris struck out 12 in the Lakers' 6-0 victory over Minneapolis South. Photo by Mark Hvidsten, SportsEngine

Go ahead and add Kal Harris to that list. The Minneapolis Southwest senior struck out 12 batters in a rain-shortened, five-inning 6-0 victory over Minneapolis South on Wednesday at Bossen Field and reached 100 strikeouts in a season for the second time.

Harris struck out seven of the first nine batters they faced to reach the milestone. Harris has 105 strikeouts for the season and their name is right there with Hostettler, Schwartz and company among the state’s leaders, currently tied for 11th.

“I guess now my goal will be 150,” Harris said after a short-but-hard rainfall ended the game prematurely. 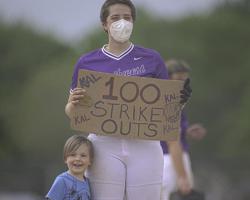 The victory leaves Southwest (9-5, 5-0) in position to take away the Minneapolis City Conference title from South, which has held it since 2017. Southwest was the 2016 champion.

South (4-4, 4-2) still has a chance at a share of the league title. But that would mean Minneapolis Washburn, in third place in the conference, would have to beat Harris and the Lakers on Thursday. Harris isn’t about to let that happen.

Southwest coach Richard Sisson said when Harris is on, they’re on.

“You can tell within the first couple of batters how the game is going to go,” Sisson said. “There’s not much I have to worry about.”

South’s Marta Branden popped up to Lakers third baseman Megan Smith leading off the game before Harris struck out Davis Sagebarth. Grace Pettis got credit for a single when she popped up in front of home plate and Southwest catcher Lindsey Bartholomew couldn’t find the ball.

Harris struck out the next seven batters to establish control.

The Lakers went down in order in the first inning but pushed in four runs in the second, with Hazel Hanson and Evelyn Jastrow each hitting two-run singles. Ginny Harris homered in the third and Smith walked and scored in the fifth. 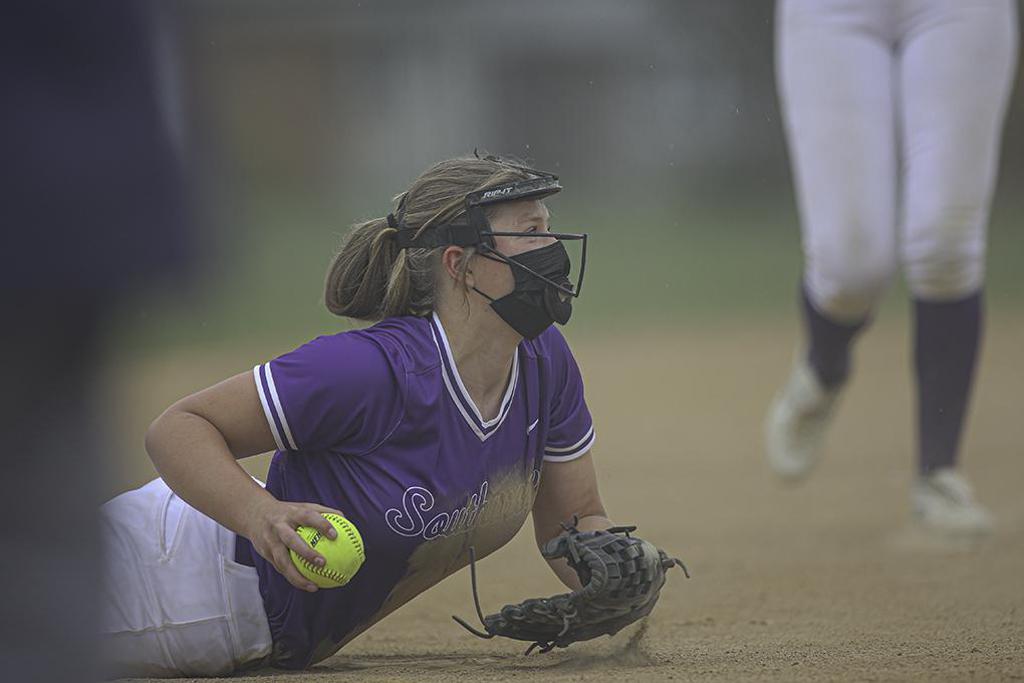 Kal Harris didn't need a lot of help from their infield, but when they did they got plays like a diving catch of an infield popup by third baseman Megan Smith. Photo by Mark Hvidsten, SportsEngine

Wednesday’s game at Bossen Field was all about Minneapolis Southwest senior Kal Harris, who struck out seven of the first nine batters they faced to reach the 100-strikeout milestone for the second time in their high school career. Harris led the Lakers to a 6-0 five-inning victory over Minneapolis South.

Well, almost all about Harris. The victory, which came to an unceremonious end with a short but heavy rainfall at the start of the sixth inning, left Southwest in a strong position to win the Minneapolis City Conference.

The Lakers (9-5, 5-0) can clinch the conference title Thursday with a victory over Minneapolis Washburn (3-7, 3-2). With a loss to Washburn, South will have a chance to take the title away from the Lakers by beating them in a regular-season finale on May 25.

Harris finished the game with 12 strikeouts, giving them 105 for the season. As a sophomore, they hit the 100-strikeout milestone in the Class 4A, Section 6 playoffs.

Hazel Hanson and Evelyn Jastrow hit two-run singles in a four-run second inning, giving Harris and the Lakers the runs they needed. Ginny Harris hit a solo home run in the third. 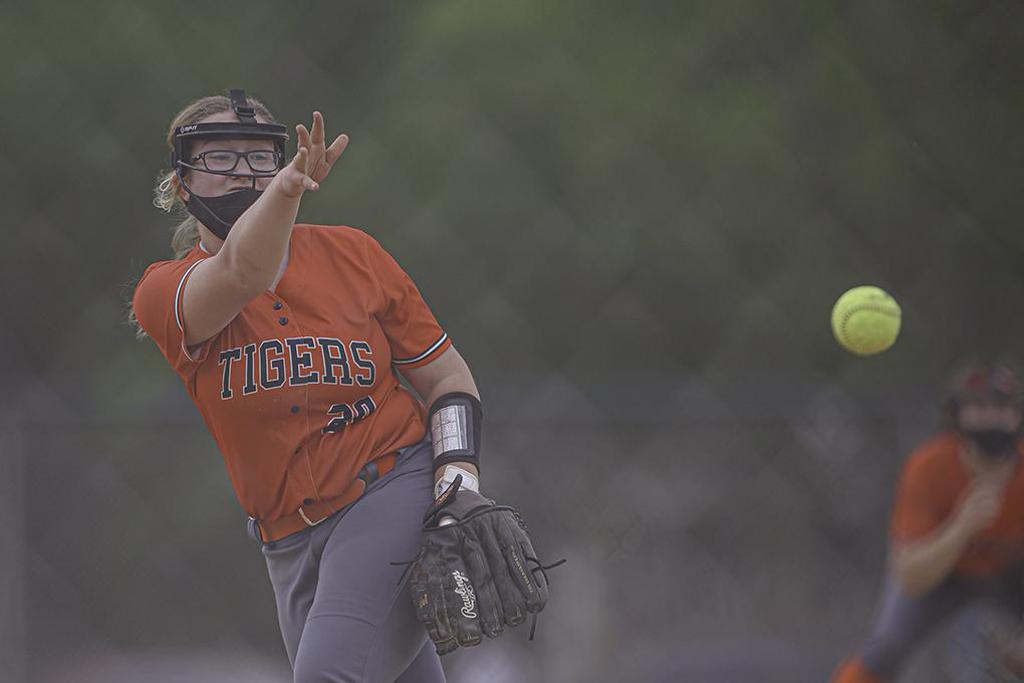