The Cougars needed one offensive outburst to propel themselves over the Elks on Tuesday. 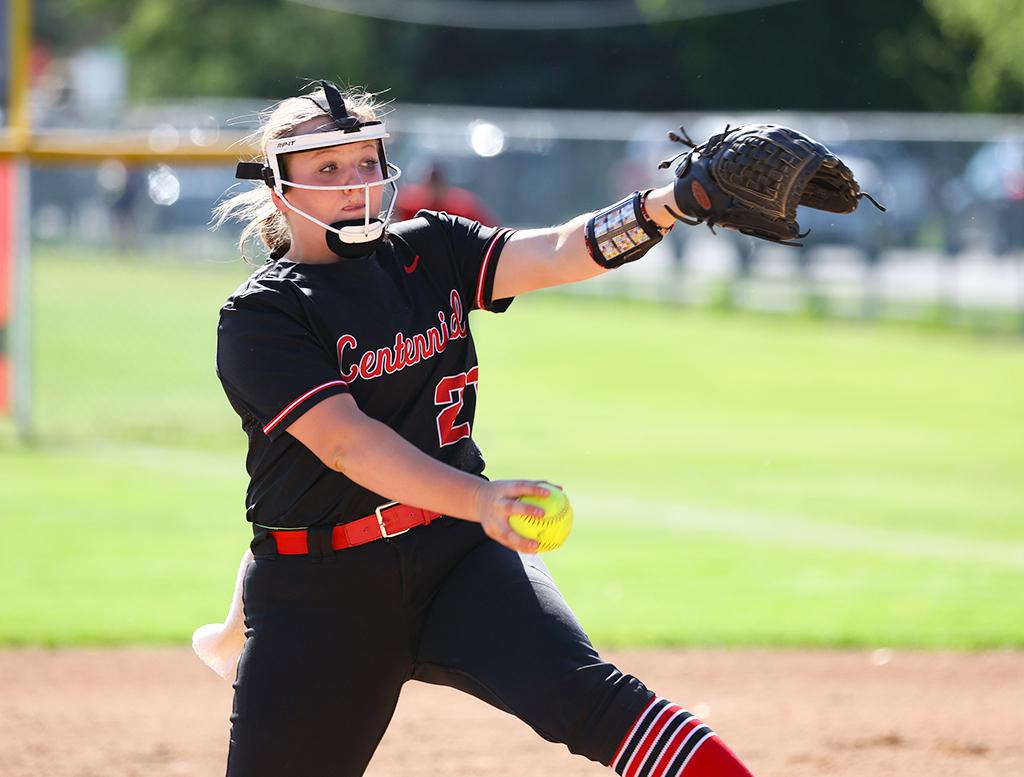 Helene Krage finished with a pair of singles and two RBIs, and pitched a complete game in Centennial's 3-0 win over Elk River. The win secured a Northwest Suburban Conference title for the Cougars. Photo by Cheryl A. Myers, SportsEngine

Centennial hasn’t been a team to shy away from big games. In fact, the Cougars tend to play even better when they’re facing top competition, according to coach Rick Thomas.

The Cougars proved that on Monday in a 5-0 win over Forest Lake, which is ranked No. 6 in Class 4A in the coaches’ poll from May 20. But Centennial didn’t have much time to celebrate, as it was right back on the field Tuesday for a Northwest Suburban Conference deciding matchup against No. 2-4A Elk River.

The key to the game? Let the players play their game.

“They have the experience, they have the confidence in themselves and as a coaching staff, we just can’t screw it up,” Thomas joked. “We got to let them do their thing… They’re so good that they’re going to produce their runs, they’re going to shut it down defensively.” 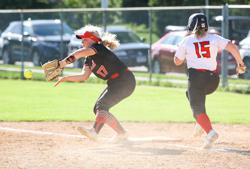 Behind junior pitcher Helene Krage’s two RBIs and complete game from the circle, No. 3-4A Centennial did exactly that, securing the Northwest Suburban Conference title with a 3-0 win over the Elks at Centennial High School.

Krage tallied eight strikeouts, while only allowing three hits and walking one.

“It felt really good. I have a really good team behind me so that helps,” Krage said.

Krage also led the way from the plate, going 2-for-3. Her second hit ended a four-inning scoring drought, putting the Cougars (18-1, 13-0) on the board in the fifth with a single that brought seniors Ella Fidler and Maddy Ringen home. Fidler led off the inning with a double off the center field fence and Ringen reached on a bunt bobbled by the Elk River infield.

“She wheels and deals. Offensively, she’s been a maniac for us as well,” Thomas said. “Once we had that three-run lead, even though it was Elk River, I felt pretty good with her in the circle.”

The three runs proved enough as Krage kept the Elks (15-2, 12-1) off the board in the sixth and seventh innings. Her strong performance from the circle was matched early, as Elk River ace Annie Volkers had stifled the Centennial offense through four innings.

Volkers, an Illinois State commit, walked six batters through three innings but always followed walks with strikeouts. She finished with six strikeouts to keep the Cougars off the board early, giving her 174 strikeouts on the season, a mark good for fifth in the state.

“(Annie) worked hard today. They got some good hits, they got some timely hits, and their pitcher, she’s great. She hit her spots; she had a couple of our girls’ numbers,” Elk River coach Danielle Bloom said. “We're going to go back and we’re going to work on what she was throwing. It just comes down to competing every pitch. They competed every pitch. We took some off.”

The Cougars strung a pair of hits together in the fifth. After Krage drove in the two runs, junior Alexa Just tabbed a single and was brought home off another single from senior Emma Hopkins.

With the regular season nearing its end, both teams got an early taste of postseason-feeling action on Tuesday. Thomas said this is just the type of team you want to coach.

“In their mind, they know they can go out and beat anyone,” Thomas said. “Having two back-to-back games (Forest Lake and Elk River) like that and coming out on top in both of them is a huge confidence booster walking into sections for sure.” 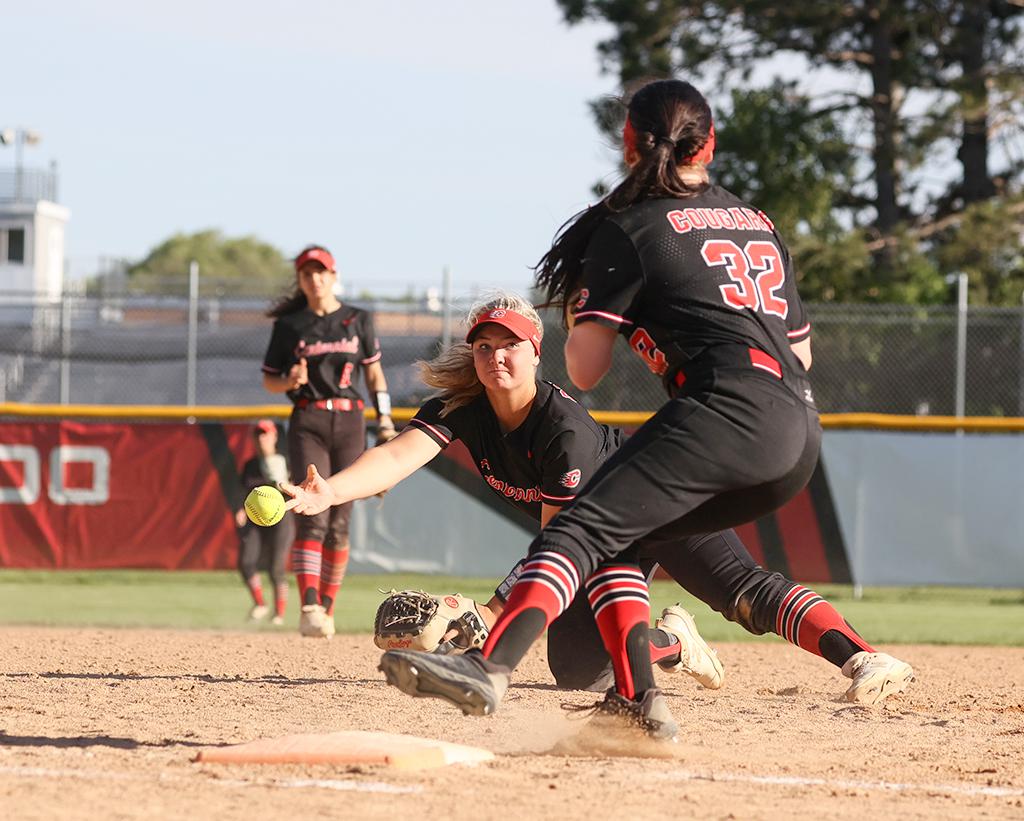 First baseman Maddy Ringen picks up a ground ball and tosses it to Adrianna Thomas (32) for the final out in the game. Ringen scored the second of three runs in the fifth inning for Centennial. Photo by Cheryl A. Myers, SportsEngine

Tuesday’s Northwest Suburban Conference-deciding matchup between Elk River and Centennial was a pitchers’ duel, at least for four innings.

Tied 0-0 in the fifth inning, Helene Krage cracked a single that broke the scoreless drought, bringing Ella Fidler and Maddy Ringen home. The Cougars added one more run in that inning off an Emma Hopkins single that brought Alexa Just in to score. Those were all the runs Centennial needed.

Krage finished with a pair of singles and two RBIs. She also kept the Elks, ranked No. 2 in Class 4A in the coaches’ poll from May 20, off the board from the circle. Krage pitched a complete game and finished with eight strikeouts. The No. 3-4A Cougars needed a strong performance from the circle as they faced off against Elk River ace Annie Volkers.

Volkers pitched all six innings for the Elks (15-2, 12-1) and tossed six strikeouts. She kept the Cougars (18-1, 13-0) off the board through four innings and in the sixth, but Centennial took advantage in the fifth. 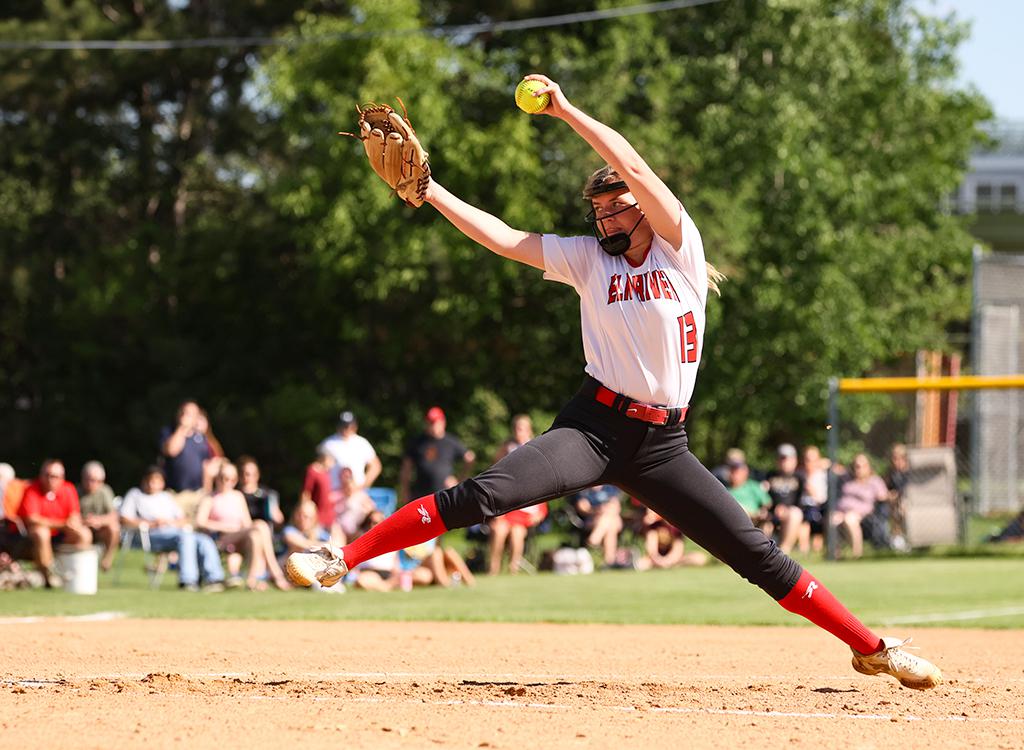