Becker won the Class 3A title while Le Sueur-Henderson took honors in Class 2A. 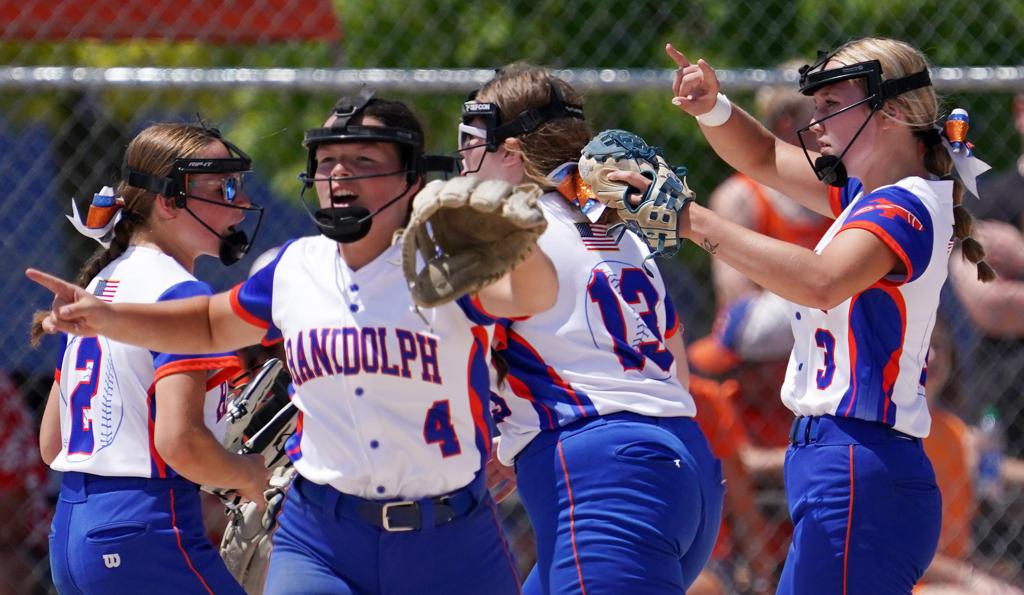 Randolph pitcher Morgyn Otte (3) celebrated an out with her teammates during the Class 1A championship game Wednesday against Browerville. Photo: ANTHONY SOUFFLE • anthony.souffle@startribune.com

The No. 1 team in Class 1A all season, undefeated and featuring a pair of senior superstars, had met season-long expectations of winning the school’s first softball state championship after taking third in 2018 and 2019. They had dominated opponents behind the battery of pitcher Morgyn Otte and catcher Megan Erickson, who have played together since fifth grade.

But at the state tournament, they played in the final game Tuesday night, winning their semifinal as midnight approached. Players didn’t reach their hotel until well after.

“Being up early really brought our energy down at the beginning of this game,” Erickson said. “It took us about the third or fourth inning to get our energy up, and that’s when we started to play our best.”

Their best was borderline spectacular. After three scoreless innings, the Rockets (27-0) scored a run in the fourth, then nine more in the fifth and another in the sixth to defeat the Tigers.

“We knew we were going to win today. Everyone was saying that at the hotel,” Erickson said.

Otte, who had thrown a one-hitter in the semifinals and 10 no-hitters during the season, allowed the first two Browerville hitters to reach base. The Rockets committed an uncharacteristic three errors in the first three innings.

They were brought back to life when Browerville got its only run when a play at the plate was ruled obstruction and the Tigers awarded a run.

“It fired up the whole team,” Erickson said. “When we got back to the dugout, we said we’re going to use that to bring our energy up. The next inning is when we scored all our runs. When we’re mad, we’re like ‘OK, everything is getting left out on the field.”

Nine runs later, they had the victory all but sealed.
The game ended fittingly on a strikeout, a final one with Otte pitching and Erickson catching. That it came in a state championship game had Otte a bit emotional.

3A: Pitcher’s return puts Becker on trail to title

NORTH MANKATO, MINN. - Becker senior pitcher Emma Eickhoff suffered a dislocated kneecap at the start of the softball season and missed four weeks.
In the meantime, the Bulldogs were a .500 team.

When Eickoff returned, Becker’s season took off. The Bulldogs (20-6) won 15 of their final 16 games, capped by a 4-0 victory over Winona in the Class 3A championship game Wednesday.

Eickhoff threw her second three-hit shutout of the tournament. She gave up only 10 hits and one run in three tournament games.

“And, while that run was earned, but the reason we gave up that run was because of a misplayed ball,” Becker coach Jason Baune said. “I don’t know if anyone could expect that from anybody. Emma’s great, but that was really impressive.”

Becker took a 1-0 lead over Winona (21-6) in the third inning. Eickhoff made it stand up until Kurstyn Patnode hit a three-run home run, her second of the tournament, in the seventh for the margin of victory.

“That was nice,” Eickhoff said. “It’s a lot easier to pitch with a big lead.”

Eickhoff struck out the final two batters she faced in the seventh to seal the victory.

“This is amazing,” she said. “It’s the first time this team has ever done this, so it’s a really big deal in Becker.”

2A: After lone loss, LeSueur-Henderson claim title it sought

NORTH MANKATO, MINN. - An almost perfect softball season for Le Sueur-­Henderson finished the way its fans felt was only fitting: A 7-4 victory over St. Charles in the Class 2A championship game Wednesday.

The Giants (24-1) had their undefeated hopes derailed by a late-season 3-1 loss to Zumbrota-Mazeppa. The belief among the Giants faithful was a state championship was a fitting salve.

“We didn’t hit in that game like we normally do,” said Tiff Thomson, mother of catcher Zoie Thomson.