The Bears had a late 1-0 deficit, but came back with two runs in the seventh to beat the Ponies on Wednesday. 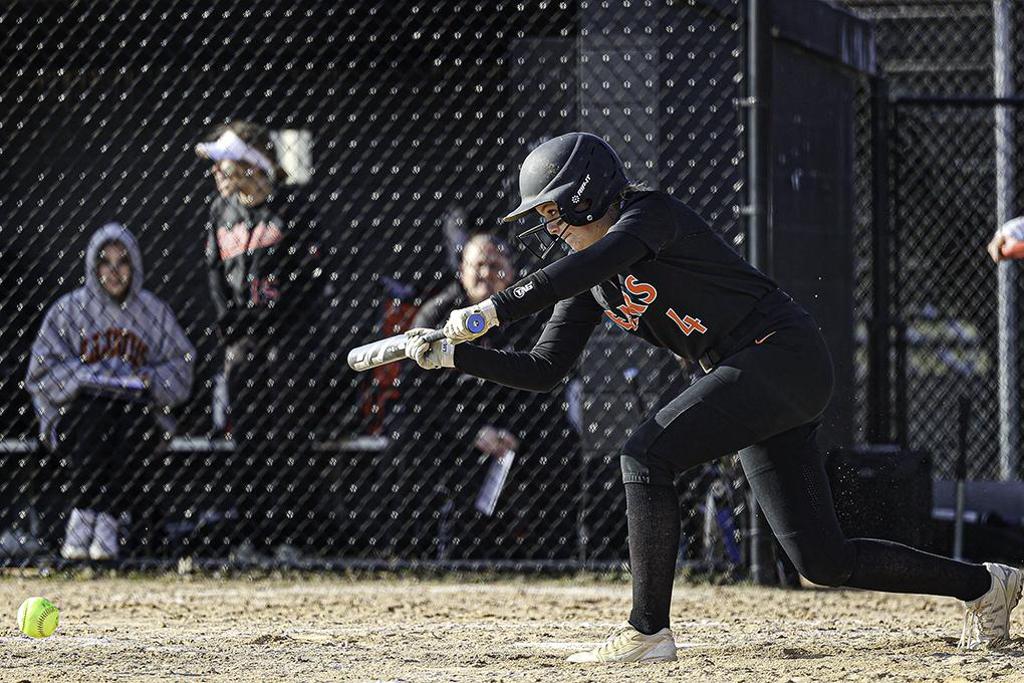 Pinch hitter Lily Glendenning (4) puts down a bunt that put runners on first and third with no outs in the bottom of the seventh, setting up Clara Griebel's game-winning hit. Photo by Mark Hvidsten, SportsEngine

When two equally talented teams go head to head, the difference between winning and losing, as Stillwater coach Angie Ryan said, "comes down to the little things."

On Wednesday as two of the best teams in Class 4A, Section 4 met on the White Bear Lake field, it was a couple of little things that spelled defeat for a Ponies team seeking its third consecutive state tournament.

An errant throw on a sacrifice bunt allowed a White Bear Lake runner an extra base and an extra out and set up No. 8 hitter Clara Griebel's long fly ball single to right over a drawn-in outfield that scored two runs and let the Bears walk off with a 2-1 victory over their Suburban East Conference and Section 4 rivals. 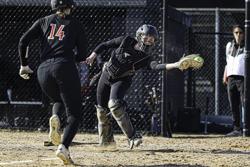 The victory came just four days after Stillwater claimed a decided 11-1 victory on the same field that left a lingering effect on the White Bear Lake players.

"We fell apart, collectively, in that game," said White Bear Lake coach Kaity Wightman. "We decided that couldn't happen again. This is the way we know we can play."

It also left a three-way tie atop the Suburban East Conference standings, with Stillwater, White Bear Lake and Forest Lake each at 5-1 overall and in conference play. The Ponies and the Bears could very well see each other again in section playoffs. Stillwater came into the season ranked ranked fourth by Breakdown Sports Media and White Bear Lake ranked ninth.

Wightman, who played her senior season under Ryan at Forest Lake, said she would have been happy with the way her team played had it not been able to rally in the seventh after Gabby LaFavor broke up a scoreless pitcher's duel with her second home run of the season in the top of the sixth. She didn't give up home after LaFavor's blast, but she said she wouldn't have predicted the happening in the bottom of the seventh against a pitcher, Keira Murphy, who had been dominant through six innings.

Bears shortstop Jordan Meyer led off the inning with a solid single off Murphy, who had struck out eight, walked none and had allowed just two hits through the first six innings. The Bears had only two baserunners reach second.

Wightman sent in Lily Glendenning to bat for Abby Taylor, giving her the task of moving Meyer into scoring position. Glendenning put down the bunt, but Murphy's throw was wide of first baseman Addison Coffey, allowing Meyer to take third and leaving Glendenning safe at first.

Murphy picked up her ninth strikeout with the next batter before Griebel lofted her fly ball to right field, allowing Meyer and Glendenning to score and seal the White Bear Lake victory.

Stillwater's recipe for success this season has come down to strong pitching from Murphy and a powerful lineup that now has nine home runs in six games. But LaFavor said she was afraid a single run wouldn't be enough against the Bears, even with Murphy pitching the way she was. "They just got the better of us today," she said. 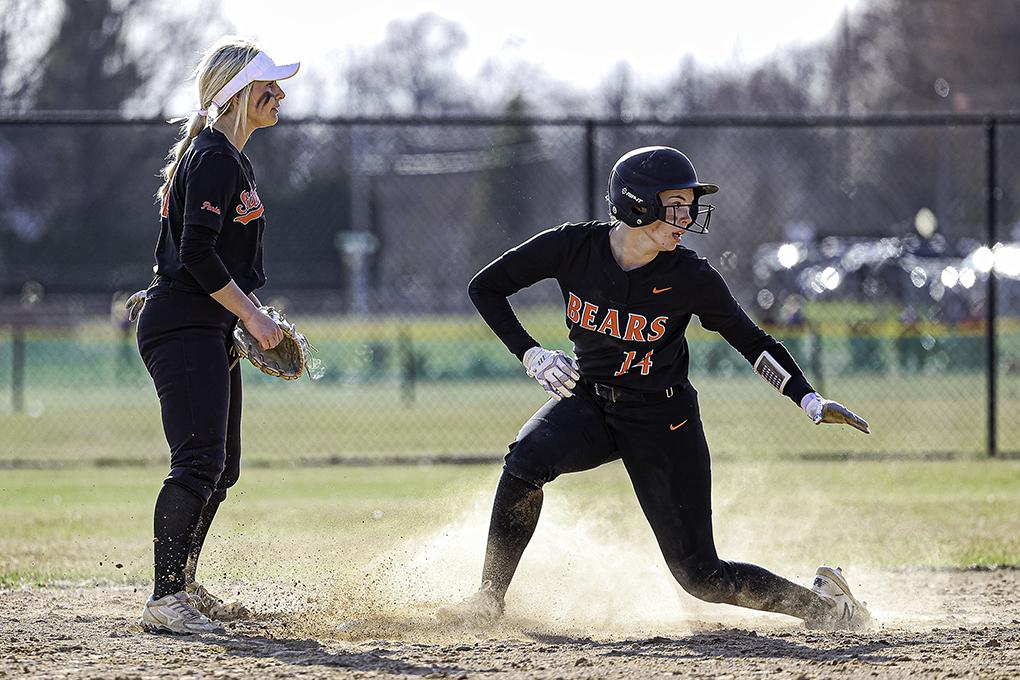 Stillwater had White Bear Lake under its control. Until the Ponies didn't.

After collecting just two base hits and advancing only two runners as far as second base through the first six innings, White Bear Lake loaded the bases with no outs in the bottom of the seventh to set up Clara Griebel's long fly ball to right over a drawn-in outfield that scored two runners and gave the Bears a 2-1 victory over their Suburban East Conference and Class 4A, Section 4 rival.

The victory came just four days after Stillwater had beat up on the Bears in an 11-1 victory on the same field. It pulled White Bear Lake (5-1, 5-1) into a first-place conference tie with Stillwater (5-1, 5-1) and Forest Lake.

Stillwater pitcher Keira Murphy entered the game with a 4-0 record and a 0.56 ERA and pitched to form through the first six innings. She finished the game with nine strikeouts.

The Bears' Chloe Barber, who gave up a home run to Gabby LaFavor in the top of the seventh that broke a scoreless tie, also struck out nine. She gave up four hits and walked two in a game dominated by pitching until the final few batters. 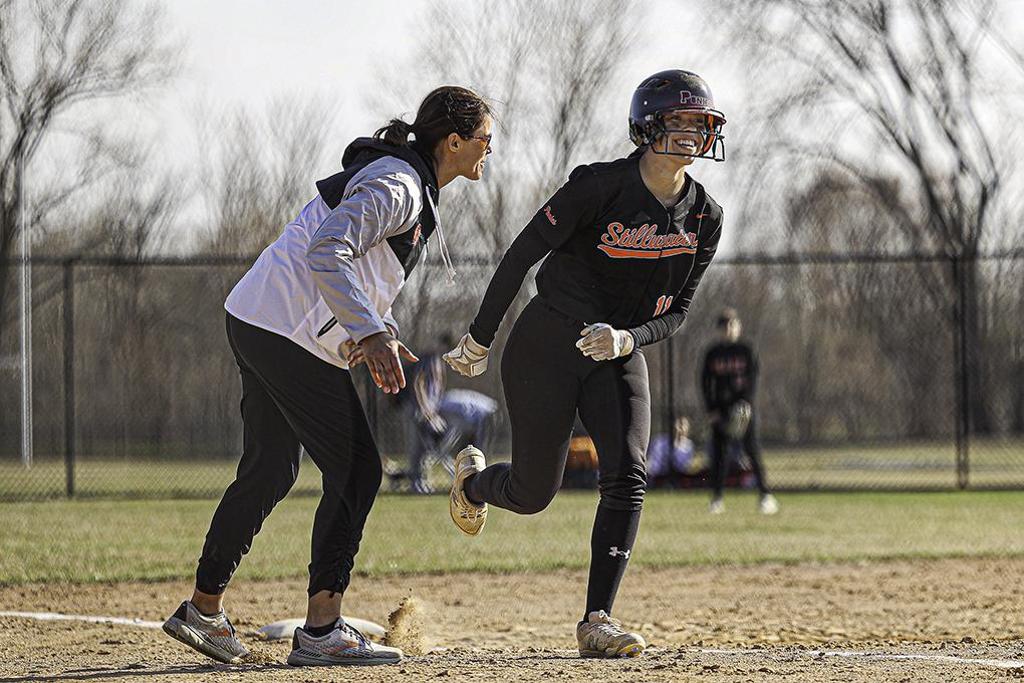 Stillwater's Gabby LaFavor smiles as she is greeted by coach Angie Ryan after her solo home run in the top of the sixth inning gave the Ponies a 1-0 lead. Photo by Mark Hvidsten, SportsEngine