Late, consistent scoring and a gem from the circle led the Huskies past the Stars. 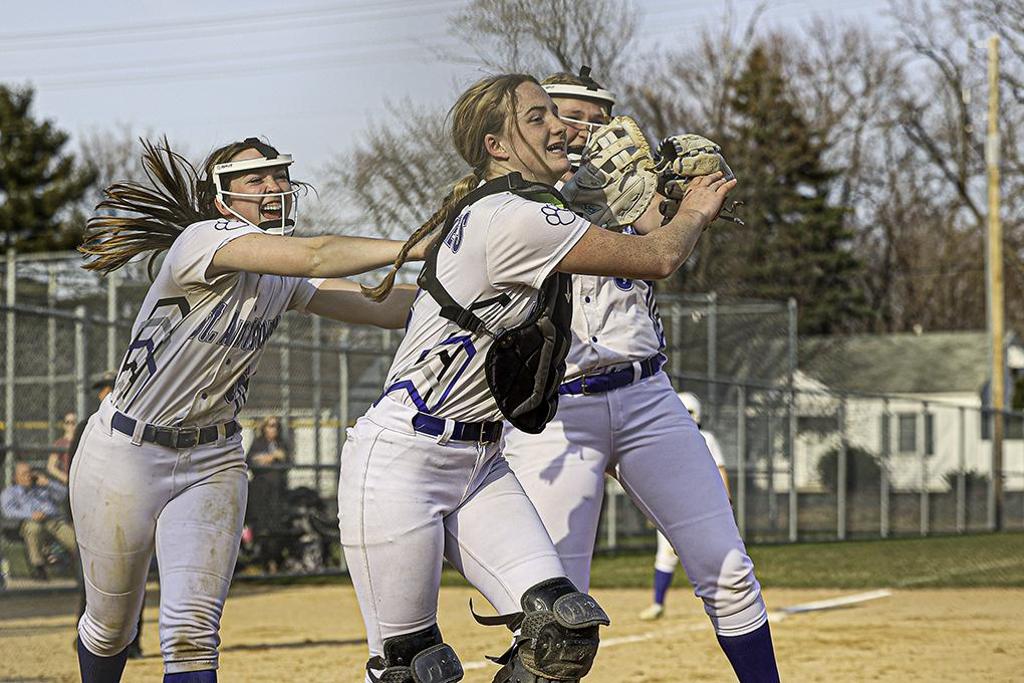 One word to describe the 2022 St. Anthony softball team could be powerful.

The Huskies, unbeaten through 10 games and third in the Minnesota Softball Coaches Association Class 3A rankings, have outscored opponents 122-8. Senior Ellie Peterson has seven doubles and a team-leading 20 RBIs to go with her 83 strikeouts and 8-0 record as a pitcher. Sophomore Anaya Boseman has six home runs and 19 RBIs and senior Tuscany Ballot has three home runs and 18 RBIs.

But there are more words that begin with the letter 'P' that Huskies coach Lamar Brendemuehl would use to describe his team, which beat Tri-Metro Conference rival and No. 9-3A Holy Angels 7-0 on Wednesday afternoon on the Stars' home field. 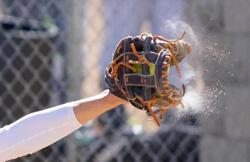 With Peterson and Ballot returning to a team that won 23 games and took home conference and Section 4 championships before falling 8-7 to Benilde-St. Margaret's in the first round of the Class 3A state tournament in 2021, Brendemuehl and the Huskies had every reason to be confident going into this season. What outsiders might not have known is that the Huskies had a number of players who saw only limited playing time last season who sat waiting to contribute to the success this season.

Sophomore catcher June McGrath was a late-season callup to the varsity but has been a value-added performer for the Huskies this season. She's splitting time with two others but makes her moments count, as she did in the victory over Holy Angels. She walked twice, scored a run and made the tag at home plate that ended the game. She also called a solid game for Peterson, who struck out 12 batters and improved to 8-0 on the season.

"Today she stepped up," Brendemuehl said of the sophomore catcher.

Other part-timers include Violet Kochman, who drove in three runs and scored another on Wednesday, and Violet Urdahl, whose two stolen bases in the third inning set up the game's first run, and the only run the Huskies needed. And then there's Anaya Boseman, a sophomore slugger who struggled against Holy Angels pitcher Leah Cierzan but has injected a large dose of power into the St. Anthony lineup.

Persistent is another descriptor of the Huskies.

The Huskies' batters struggled in the early going against Cierzan but never let up. McGrath drew a walk to lead off the third to give St. Anthony just its second baserunner. Urdahl hit into a fielder's choice but then did what she could to get her team on the scoreboard. She stole second. Then she stole third, and when the throw from home went into left field, Urdahl came home with what would become the winning run.

That loosened things up a little. Ballot doubled to lead off the fourth, stole third and scored on Peterson's fly ball to the centerfield fence. Kotchman's one-out single in the fourth drove in two more runs in a three-run inning that all but secured the victory.

"We just kept scratching," Brendemuehl said. "Their pitcher stymied our hitters for awhile, but they just kept going and going."

Productive is a third.

Urdahl scored two runs with just one hit. McGrath walked twice and kept Holy Angels batters close to first when they did reach base. Kochman came through with runners in scoring position. Ballot doubled and scored and hit a sacrifice fly to drive in a run. Peterson nearly completely shut down the Stars' hitters.

When you're team is 10-0 and winning games by an average margin of more than 12-1, players are producing.

St. Anthony remains atop the Tri-Metro Conference standings at 4-0 in league play. Holy Angels fell to 4-1 overall, 1-1 in the conference. 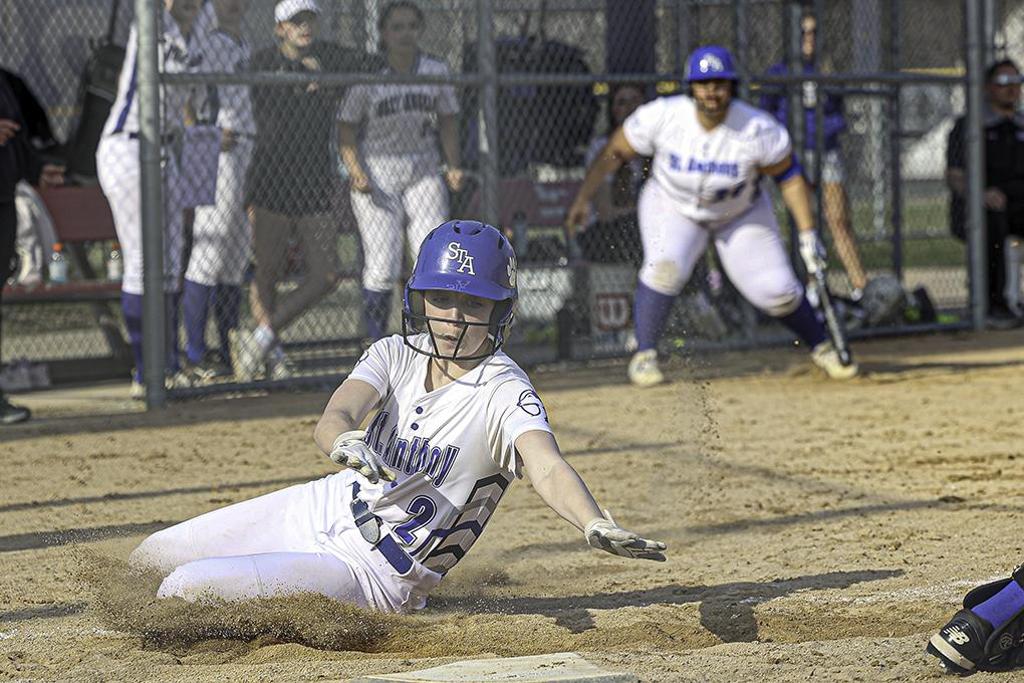 Violet Kochman slides into home plate with one of three runs the Huskies scored in the fifth inning. Kochman drove in three runs and scored one in St. Anthony's 7-0 victory at Holy Angels. Photo by Mark Hvidsten, SportsEngine

Urdahl reached base on a fielder's choice and then stole second and third. The catcher's throw to third on Urdahl's second steal attempt sailed into left field and allowed the Huskies left fielder to score the game's first run. It was all Peterson, a senior, needed to pick up her eighth victory of the season. She now has 83 strikeouts in 47 innings pitched and an earned run average below 0.70.

Catcher Kendall Thorman's double in the fourth was the Stars' only hit off Peterson. Leah Cierzan struck out seven and walked four in a complete-game effort for Holy Angels. 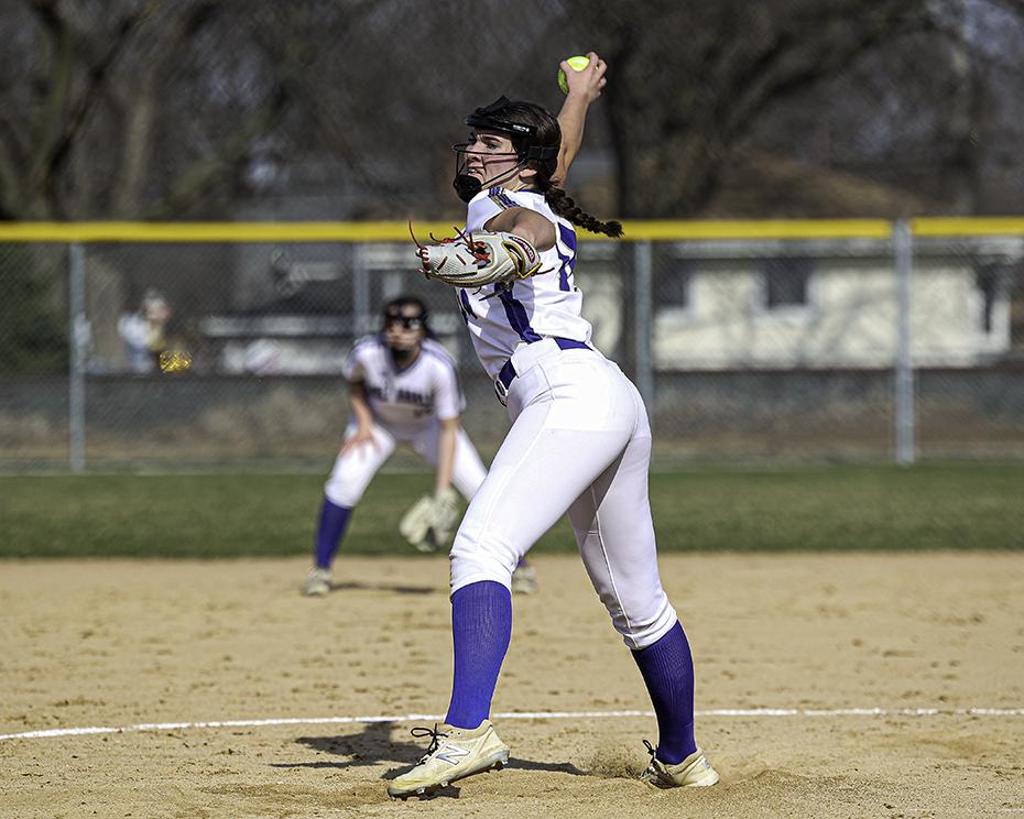