The Irish scored plenty of runs, including a five-run sixth inning, to get by the Lakers on Wednesday. 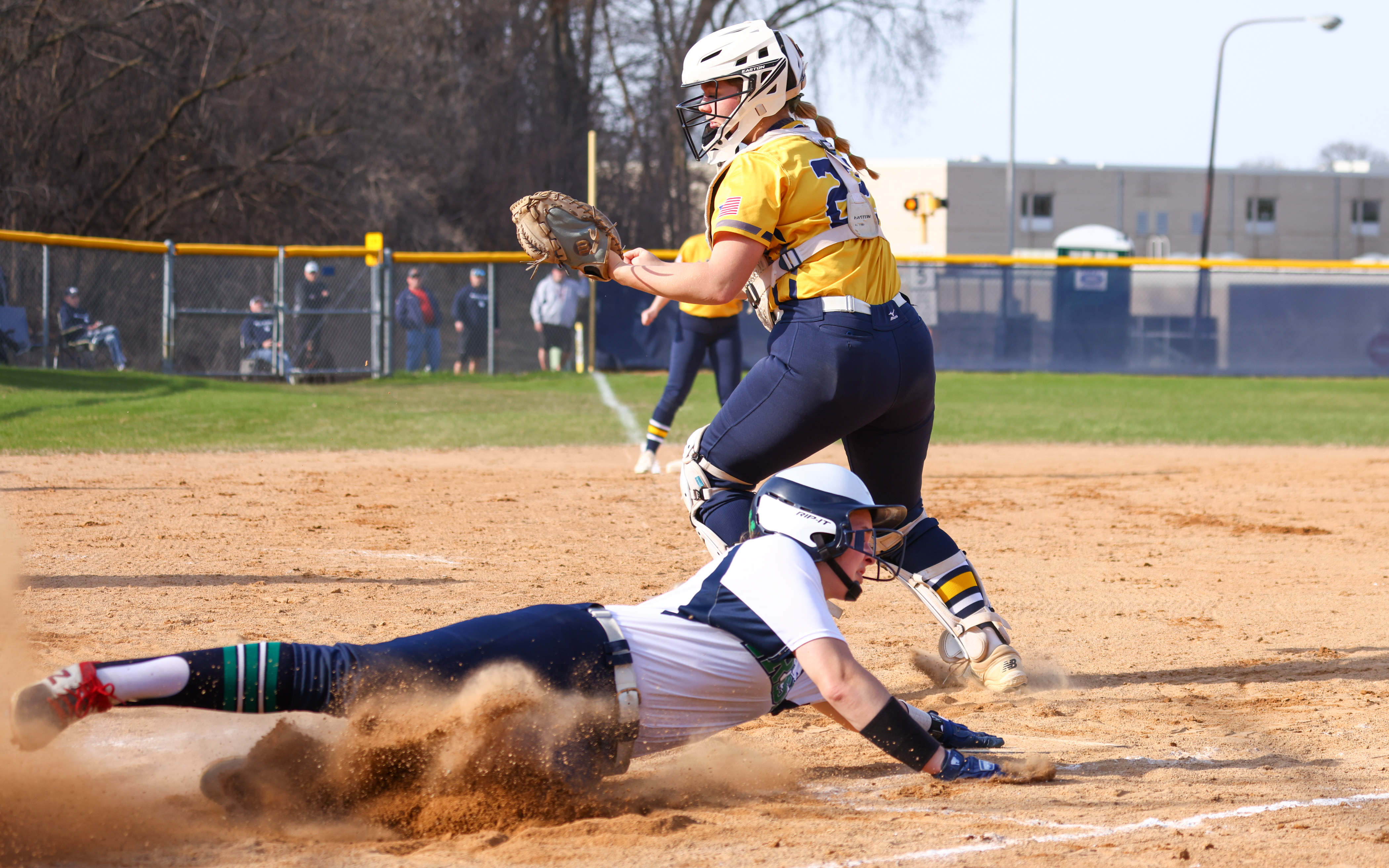 Rosemount's Isabelle Nosan safely tags home plate to score a run against Prior Lake Wednesday afternoon. Nosan went 3-for-3 at the plate and knocked in two runs in an 8-2 victory for the Irish over the Lakers. Photo by Jeff Lawler, SportsEngine

During Wednesday’s game against Prior Lake, Rosemount coach Tiffany Rose and her staff sported shirts with the phrase “Back and better” on the back.

So far, that mantra is accurate when describing the 2022 Irish squad. The defending Class 4A state champions are off to an undefeated start and continued rolling along with an 8-2 victory against Prior Lake at Rosemount High School.

Rosemount (8-0, 8-0) has gotten off to a fast start overall in 2022 and did so in Wednesday’s game. Three of the first four Irish hitters reached base in the first inning. Junior shortstop Isabelle Nosan had the third hit of the inning that drove in a pair of runs to put the Irish ahead 2-0. 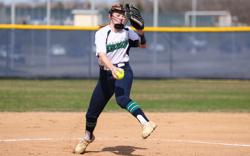 Photo gallery: Prior Lake vs. Rosemount

“For me, if I see a strike, I’m hitting it,” Nosan said. “I trust our whole lineup. No matter who’s up to bat, I think they’re going to put the ball in play and do good things.”

Nosan hit fourth in the Rosemount lineup on Wednesday. She and the three hitters in front of her—CeCe Hanson, Ari Princl and Jessa Snippes—combined to go 9-for-14 in the game with three RBIs and three runs scored.

“The top of the order has been very consistent at the start of games,” Rose said. “They see good pitches and know how to jump on them.”

The Lakers fought back in the fourth inning and tied the game at 2-2 thanks in part to a pair of Rosemount errors. The Irish came right back, however, as Nosan came around to score after Prior Lake misplayed an Irish sacrifice bunt to put the Irish, ranked No. 1 in the Class 4A coaches’ poll from May 1, ahead 3-2.

In the bottom of the sixth inning, the floodgates opened for Rosemount. The Irish sent all nine players to the plate and scored five runs while accounting for five hits. Nosan picked up her third hit of the day and scored and Hanson drove in a pair of runs with an RBI single.

“We were putting the ball in play a little bit more,” Rose said. “We also have very good baserunning. Once we start getting things rolling, our baserunners can make things happen.”

Outside of the struggles in the fourth, it was a nearly perfect day in the circle for Rosemount pitchers Maizie Anderson and Jessa Snippes. Anderson got things started with four innings of 2-run ball while Snippes finished things off with three scoreless innings. The duo combined for 11 strikeouts.

“I trust either one of our pitchers,” Nosan said. “It’s nice to have a dominating pitcher out there like them.”

As the defending Class 4A state champions, Rosemount certainly has a target on its back. But for the Irish, the focus is on navigating a schedule that has become quite condensed with the poor April weather. Wednesday started a stretch of eight games in 10 days for Rosemount.

“The girls have had lots of success,” Rose said. “The girls are trying to focus on what’s happening today. We are making sure our girls are ready for the long haul.” 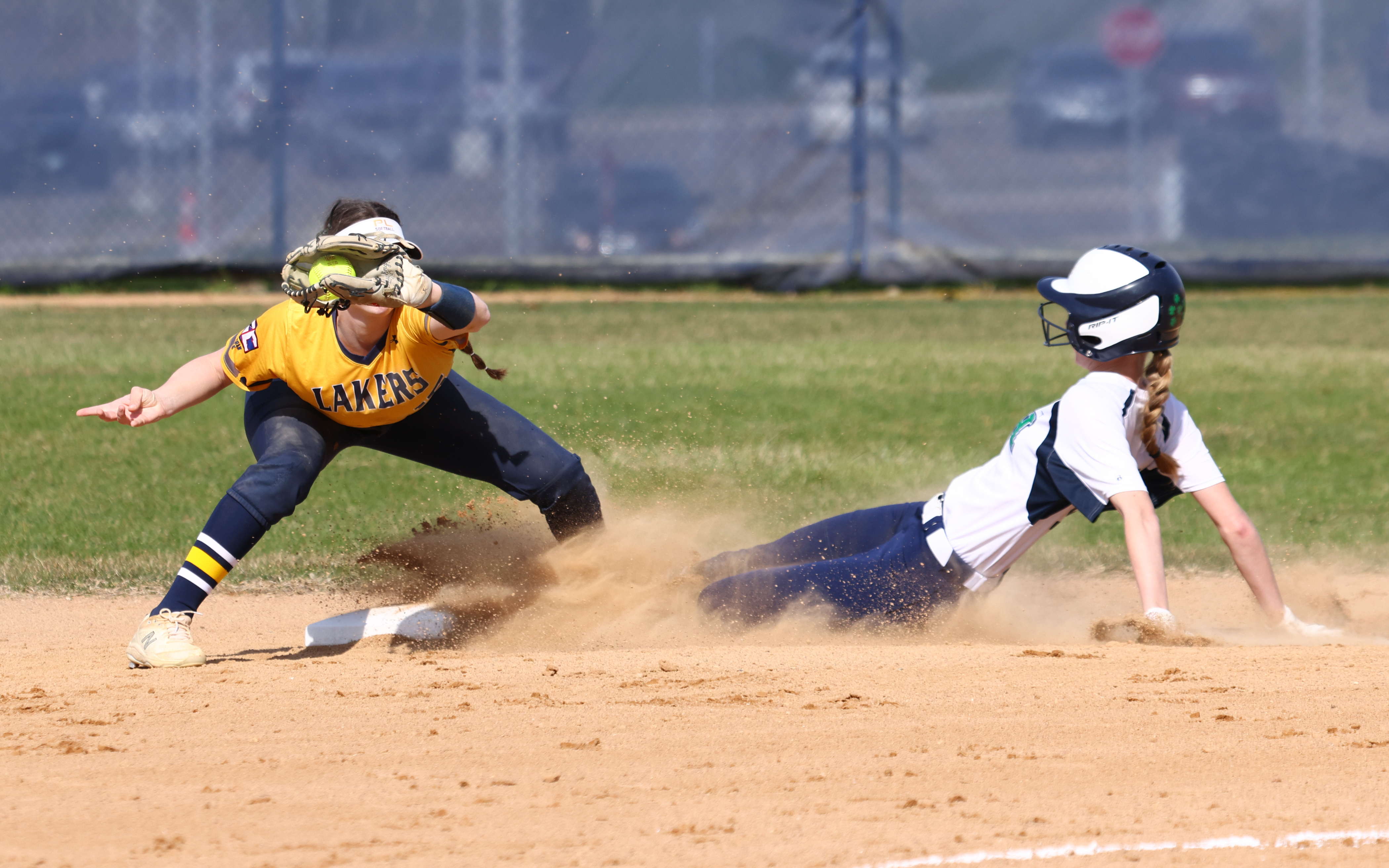 Rosemount's CeCe Hanson slides safely into second base against Prior Lake Wednesday afternoon. Hanson went 3-for-4 at the plate and scored two runs as the Irish defeated the Lakers 8-2 in Rosemount. Photo by Jeff Lawler, SportsEngine

Nosan got things going in the first inning for Rosemount (8-0, 8-0). Her first hit of the day drove in Hanson and Jessa Snippes to put her team ahead 2-0 early.

Prior Lake (7-4, 6-3) eventually countered with a pair of runs in the fourth inning. After a pair of Irish errors, the Lakers capitalized as senior left fielder Emma Schutrop tied the game at 2-2 with an RBI single.

From there, Rosemount, ranked No. 1 in the latest Class 4A coaches’ poll, took over as the Irish scored once in the fourth after capitalizing on the Lakers’ errors as Nosan came around to score on a misplayed sacrifice bunt.

In the sixth inning, the Irish blew things open as nine players came to the plate and they scored five times. Helen McKinnon, Hanson and Ari Princl all drove in runs in the big inning.

That big sixth inning forced Megan Schultz, the starter for the No. 8-4A Lakers, from the game. She picked up the loss, pitching 5 ⅔ innings, allowing eight runs on 12 hits and striking out eight.

Rosemount starter Maizie Anderson picked up the wins, allowing two runs in four innings while allowing three hits, a walk and seven strikeouts. Jessa Snippes pitched the final three innings while also going 1-for-3 and scoring a run in the win. 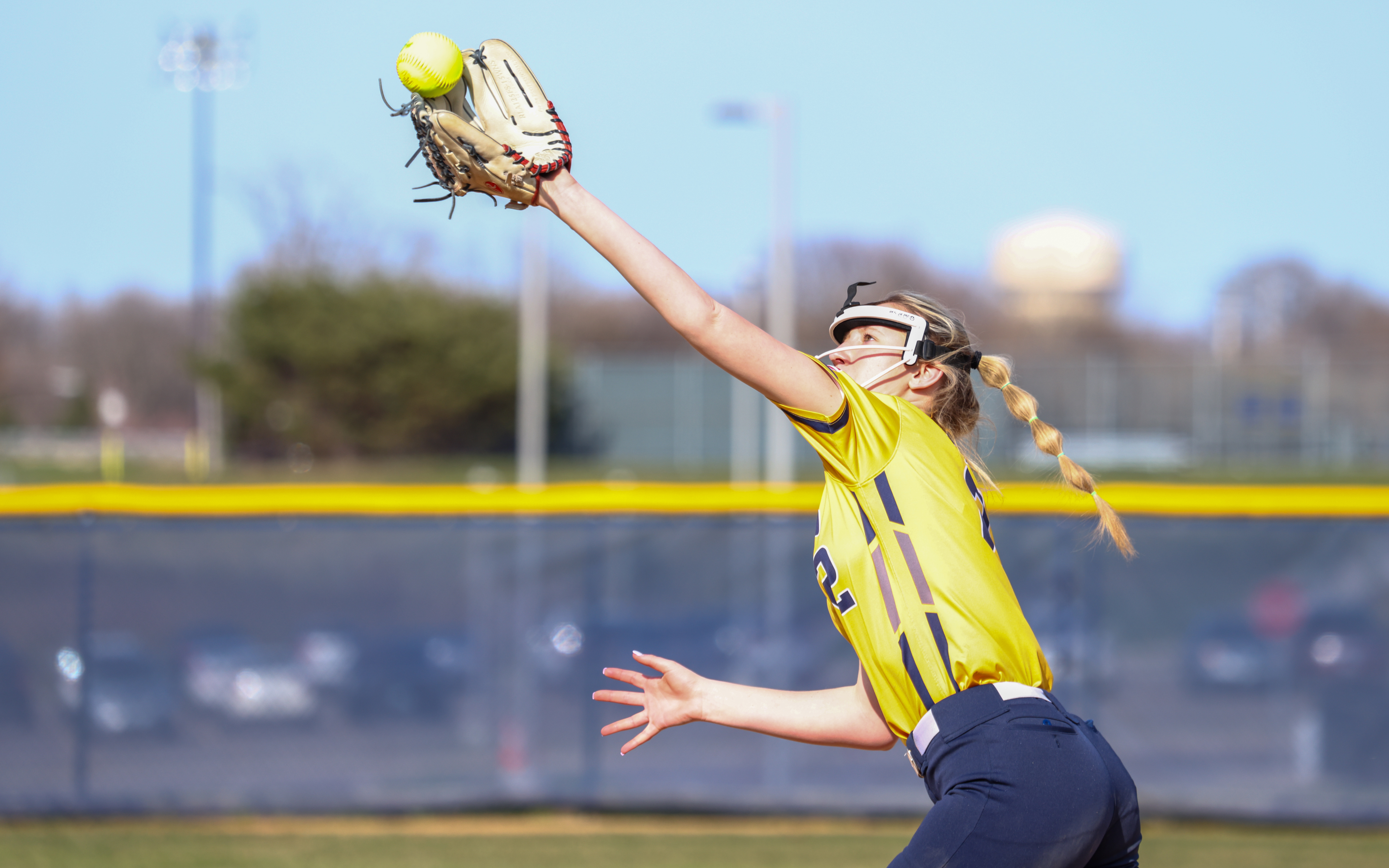 Prior Lake pitcher Megan Schultz makes a stellar defensive play to record an out against Rosemount Wednesday afternoon. The Lakers fell to the Irish 8-2 in Rosemount. Photo by Jeff Lawler, SportsEngine