Sydney Schwartz dominated from the circle for the Storm against the Red Knights. 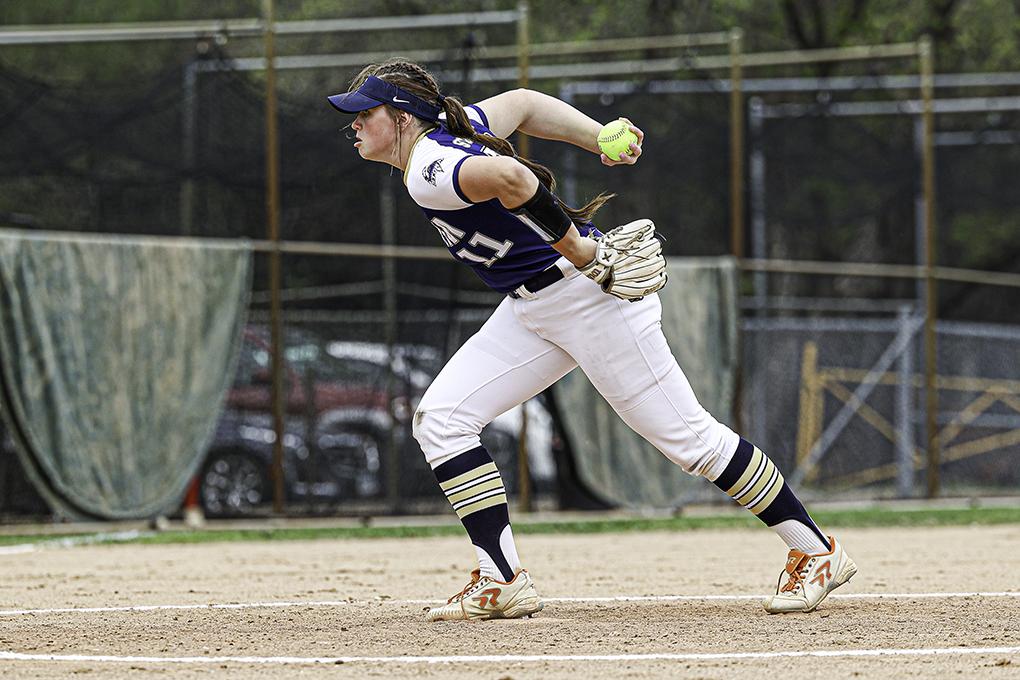 Chanhassen senior Sydney Schwartz winds into a pitch Wednesday at Benilde-St. Margaret's. She struck out 11 and passed the 600 mark for her career in the Storm's 10-0 five-inning victory. Photo by Mark Hvidsten, SportsEngine

As Sydney Schwartz rounded third base and spied the congregation of teammates surrounding home plate and excitedly awaiting her arrival, the Chanhassen senior allowed herself a small grin.

It was just the briefest of moments, but she had been caught having fun. Perhaps marveling in her own success, but more likely amused and amazed by her teammates' revelry.

It was just another day at the ballpark for Schwartz, a starter at Chanhassen since her eighth-grade season and now the team's career leader in home runs and strikeouts.

On Wednesday at Benilde-St. Margaret's, she struck out 11, hit two home runs and drove in five runs in the Storm's 10-0 five-inning victory. Chanhassen, third in the latest Class 4A rankings from the Minnesota Coaches Association, improved to 13-1 overall, 10-0 in the Metro West Conference. Benilde-St. Margaret's (6-3, 5-1) saw its five-game win streak ended. 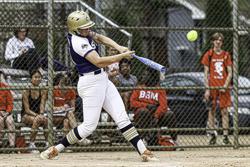 Except for that one small grin during her fourth-inning home run trot, Schwartz wore the same expression whether she was rounding the bases with another home run, striking out another batter or giving up one of the Knights' two base hits.

It's not that Schwartz doesn't enjoy her success, but she said being part of the team and doing what she can to help the Storm succeed is so much more rewarding for her.

The 32 home runs, one more than 2017 graduate Jessica Bren hit for the Storm? That's nice. The 600-plus career strikeouts? That's nice, too. But what will she remember most after she graduates from Chanhassen High School this spring and turns her attention to Big Ten softball and a college education at the University of Minnesota?

"I don't know," she said. "We just have a super good dynamic on this team, the chemistry is amazing. That's my favorite thing."

False modesty? Not if you ask Storm coach Joe Coenen.

"In my 13 years here, we've had some really good teams and some great players," Coenen said. "Syd is the best teammate we've ever had in this program."

Schwartz dominated the Knights on Wednesday. She struck out eight of the first 10 batters she faced, many of them swinging awkwardly or lunging prematurely at a changeup that clocks in at about 20 mph slower than her fastball.

With her size and her imposing statistics, an onlooker might expect Schwartz to be a power pitcher who puts batters away by overpowering them. But Schwartz has a large assortment of pitches and she uses them smartly. She says her change of speed is her greatest strength as a pitcher.

"She keeps people off balance," Coenen said. "I don't even know how many pitches she has."

She has five, coach. A fastball that has been clocked in the mid- to high-60s, a changeup, a dropball, a riseball and an off-speed riseball. She said she's comfortable throwing any of those pitches at any time.

Schwartz said she would like to break her single-game high for strikeouts, which is 12. If she hadn't been so proficient at the plate on Wednesday, she might have had the opportunity against the Knights. The game was ended after five innings because of the 10-run difference.

But hitting, too, has been nearly automatic for Schwartz. She now has 10 home runs in just 38 at-bats this season. She's hitting.657 with 25 base hits and has 25 RBIs.

But those are just numbers. There are still games to play, and plenty of lunchroom sessions with her Chanhassen teammates. 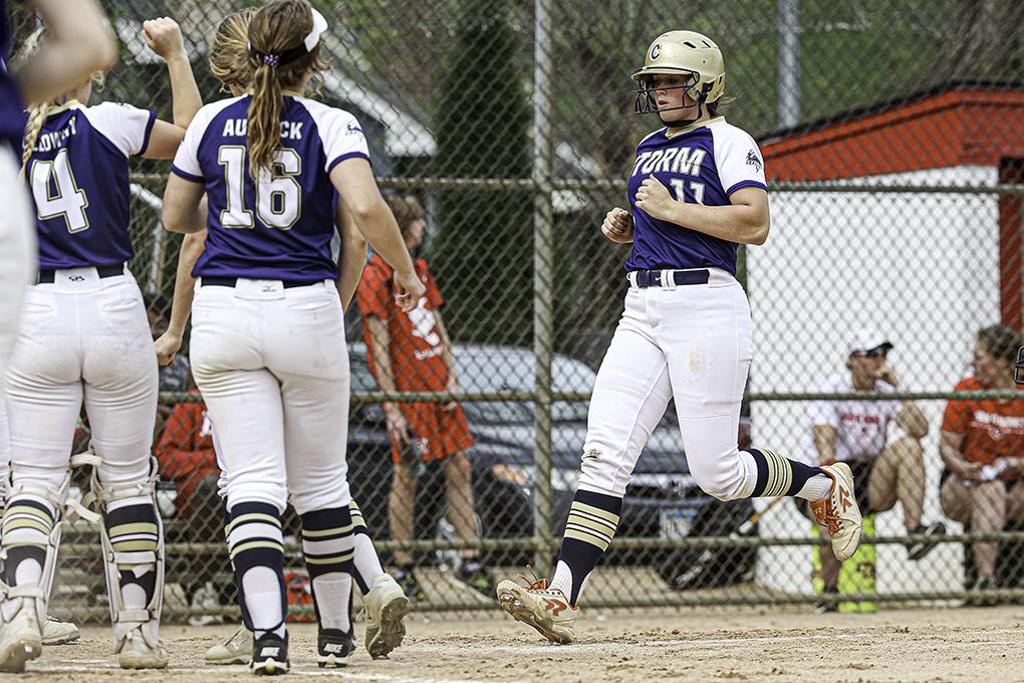 Sydney Schwartz is greeted by teammates at home plate after hitting the first of two homes runs in a victory at Benilde-St. Margaret's. Schwartz hit a home run in her next at-bat to become the school's career leader. Photo by Mark Hvidsten, SportsEngine

Sydney Schwartz hit two home runs, drove in five runs and struck out 11 in leading Chanhassen to a 10-0 five-inning victory at Benilde-St. Margaret's.

The victory was the 13th against one loss for Chanhassen, third in the latest Class 4A rankings from the Minnesota Coaches Association. The Storm remained unbeaten in 10 Metro West Conference games. Benilde-St. Margaret's (6-3, 5-1) had a five-game winning streak stopped.

Schwartz notched the 600th strikeout of a stellar high school career against the third batter she faced. She's already the Storm's career strikeout leader, despite the fact that her sophomore season in 2020 was cancelled during the pandemic.

Schwartz, who is headed to the University of Minnesota in the fall, also became the school's career home run leader. Her solo homer with two out in the fourth was the 32nd of her career and eclipsed the previous record of 31, set by Jessica Bren in 2017.

Benilde-St. Margaret's pitcher Tibby Hessian struck out the side in the first inning but also surrendered a walk, a single, a pair of doubles and Schwartz's first home run as Chanhassen jumped out to a 5-0 lead. Hessian finished with eight strikeouts. 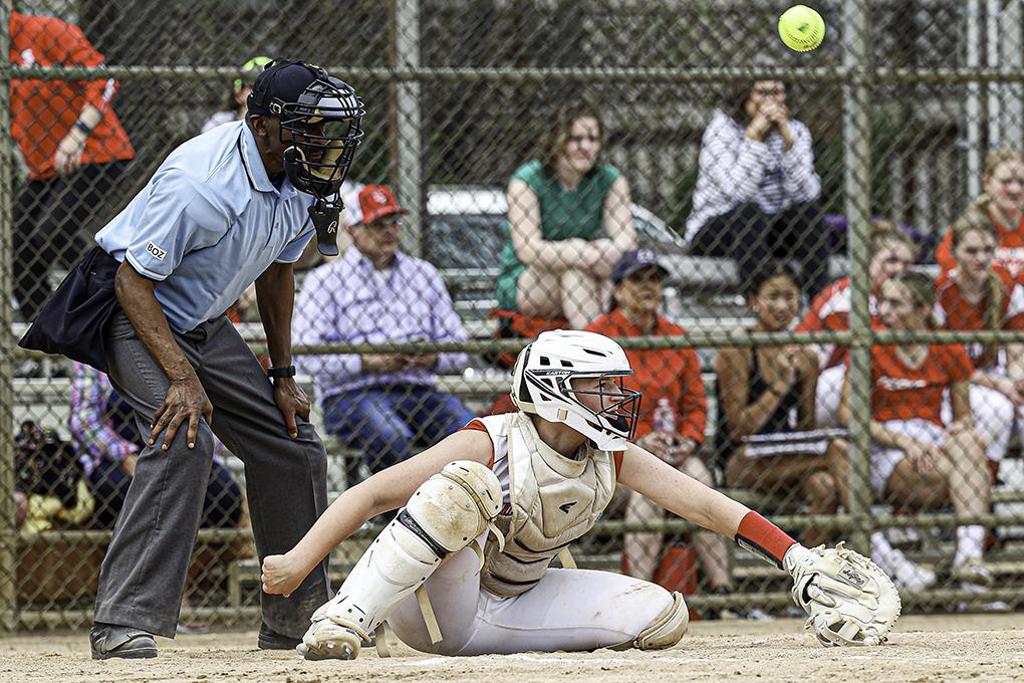 A pitch from Benilde-St. Margaret's Tibby Hessian bounced off the plate and over the head of Knights catcher Maggie Wozniak. Photo by Mark Hvidsten, SportsEngine