The Storm used a four-run rally in the bottom of the seventh and final inning to pull out the victory. Plus other section results. 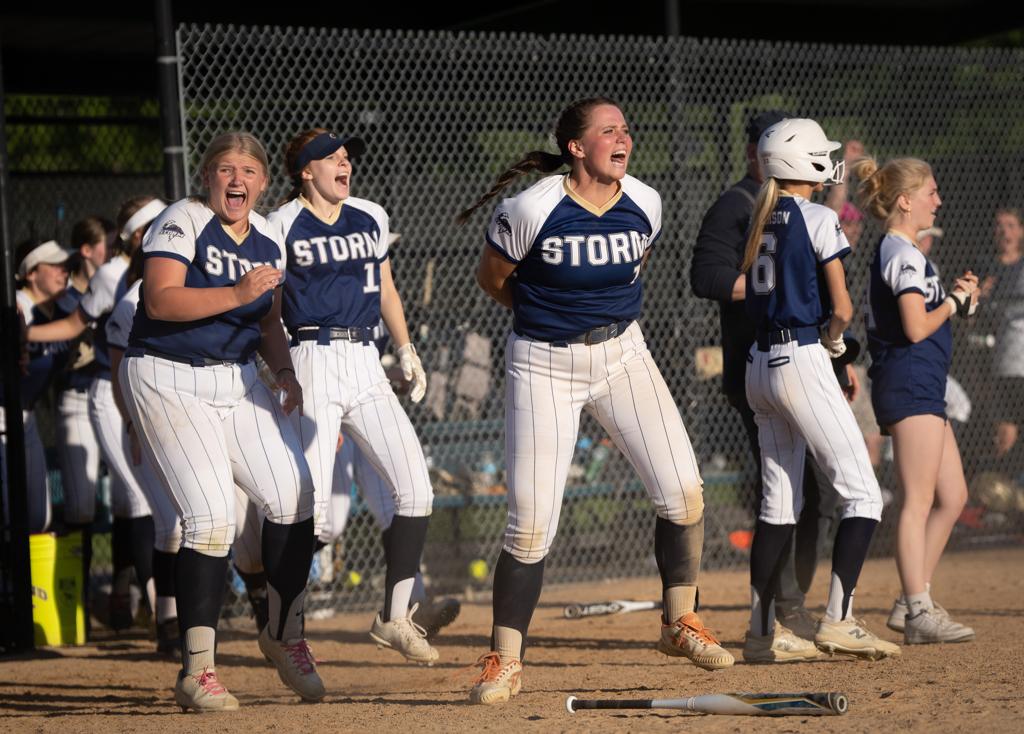 Chanhassen players celebrated in the bottom of the seventh inning as they rallied to win the Class 4A, Section 2 championship game against Shakopee on Thursday. (Renee Jones Schneider, Star Tribune)

Chanhassen pitcher Sydney Schwartz never doubted the outcome, stating one day before the Class 4A, Section 2 softball championship game against Shakopee that she was completely confident her team would win.

How it happened, however, no one could have foreseen.

The Storm trailed 6-1 in the top of the fifth inning after Shakopee’s Morgan Weiner clubbed a grand slam.

Chanhassen fought back, plating a run in their half of the fifth and getting five more in the bottom of the sixth to take a 7-6 lead.

With a pitcher of Schwartz’s caliber on the rubber — she’s a University of Minnesota commit who went into the game with an 18-0 record, a 0.98 ERA and 181 strikeouts — it appeared Chanhassen had staved off defeat.

But Shakopee showed no quit in its own right in the top of the seventh. The Sabers’ first four hitters came around to score on five hits and a walk, taking a 10-7 lead and marking the first time Schwartz had been touched for double-digit runs all season.

“But we are a resilient team and we’ve been that way all season,” said Chanhassen coach Jerome Coenen.

They showed just that in the bottom of the seventh with four runs of their own, the game-winner coming on a hard-hit single through the right side of the Shakopee infield by junior utility player Kenna Bergman.

For much of the season, Schwartz’s dominance has been the driving force for Chanhassen en route to its 21-1 record. Bergman talked about coming through for Schwartz when she needed the team to step up behind her.

“We’re all really close,” said Bergman. “So it’s really nice to be able to come through for her.”

After the game, a drained Schwartz could not have been more proud of her teammates’ refusal to quit.

“It was definitely a team effort. It wasn’t only me,” Schwartz said. “Everyone was stepping up and taking team swings instead of me swings in key spots. That was so important. I’ve definitely never been a part of a game like that. It was intense.”

In other Section finals:

Class 4A, Section 5: Helene Krage pitched a no-hitter and struck out 13 batters to lead Centennial to a 1-0 victory over Maple Grove. Centennial managed just two hits off Maple Grove pitcher Maddie Whilm, but both came in the fourth inning. Alexa Just doubled and Bryn Ruhberg followed with an RBI double for the game’s only run.

Class 4A, Section 7: Forest Lake pounded out 11 hits and got home runs from Bethany Weiss and Maddie Muellner in a 9-0 rout of Anoka. Avery Muellner pitched a two-hitter with eight strikeouts for the Rangers.