The teams will play for the title Friday at Caswell Park in North Mankato. 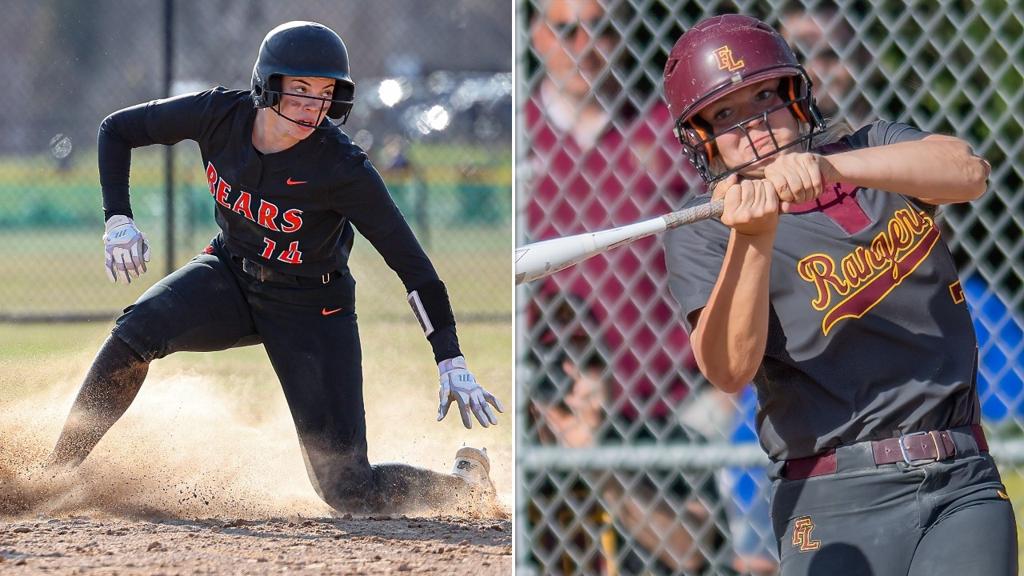 The Rangers, as they’re formally known, took care of business in the quarterfinals of the Class 4A softball state tournament Thursday, beating Centennial 6-3, then found a way to solve top-seeded White Bear Lake, beating the Bears 3-2 in the semifinals to advance to the Class 4A championship game for the second season in a row.

Sophomore pitcher Hannah Tong pitched a complete game in Forest Lake’s opener, then came in to support teammate and fellow pitcher Avery Muellner in the semifinals, dousing a White Bear Lake rally in the fifth inning, when the Bears cut a three-run deficit to a single run.

It was the third time the teams, Suburban East Conference rivals, had played this season but the first time Forest Lake emerged on top.

Before Tong stepped into the circle to pull her team from trouble, she said coach Sean Hall gave the team unique words of wisdom.

“He told the entire team that when it comes to a state championship, you can’t be a cow,” Tong said. “Cows run away from storms. You have to be a buffalo. They go straight into the storm.”

Channeling her inner bison, Tong, who entered the semifinal with two runners in scoring position and two outs, induced a foul-out to end the threat, then held White Bear Lake to a pair of harmless baserunners over the final two innings.

Hall related another motivational yarn he told Tong when she took over for Muellner in the fifth.

“I told her to think that Avery had a party, left a huge mess and had to leave right away and I’m going to clean it up for her,” Hall said. “Then I told Avery the same thing. Next time out, you’ve got to be ready to clean up for her.”

Having won two previous games against Forest Lake, White Bear Lake coach Kaity Wightman said the difference was as simple as a change in circumstance.

“It’s the state tournament in Mankato, not our home field in White Bear Lake,” Wightman said. “We knew they were a good team and if we didn’t play our best they could take us.”

Don’t believe it for a second. Just ask the Brainerd Warriors.

The Warriors are the only undefeated team in Class 4A and remained so by defeating Hopkins 5-2 in the Class 4A semifinals.

Undefeated even after playing a rigorous schedule designed to prepare them for postseason play, including a 2-1 victory over Forest Lake in the regular-season finale. The two teams will square off in the Class 4A final at 1 p.m. Friday.

Brainerd is clearly playing for respect.

“One hundred percent,” senior pitcher Olivia Tautges said. “We’ve done all we can in the regular season and they still didn’t give us the No. 1 seed. So we came in here angry and wanted more. We came in with the mind-set that we can do anything.”

Tautges was front and center for the Warriors Thursday. She went 3-for-3 with a home run and a double and pitched a complete game with eight strikeouts in a 4-3 victory over East Ridge in the quarterfinals.

In the semifinals, Tautges gave up just three hits and two unearned runs to Hopkins, which had defeated Chanhassen and Metro Player of the Year Sydney Schwartz 3-1 in the quarterfinals.

The Royals led 2-1 before Brainerd used two hits, an error and a passed ball to score three runs in the fifth for a 4-2 lead.

Brainerd added an insurance run in the sixth.

“Doing the tough schedule is probably the best thing we could have done for ourselves this season,” Tautges said. “Really battling through tough games is what’s made us.”

Winona 4, Chisago Lakes 0: Winona scored two runs in the first inning, another in the third and a fourth in the fifth inning and pitcher Ava Hamsund hurled a two-hit shutout to lift the Winhawks to a victory over Chisago Lakes in the Class 3A semifinals.

The victory ran Winona’s streak of shutout innings to 14 after the Winhawks defeated Rocori 9-0 in the quarterfinals.

Mankato West 4, Simley 3: Mankato West rallied from a 3-0 deficit to beat Simley with a run in the bottom of the seventh inning, setting up an All-Big 9 Conference final.

Simley took a 1-0 lead on a home run by Rowan Smith in the second inning. The Spartans bumped the lead to 3-0 when Olivia Hennanger clubbed a two-run home run in the fourth.

Mankato West responded in the bottom of the inning with a two-run homer by Carlee Emery. Emery added her third RBI with a two-out single in the fifth, scoring Breck Carlson.

Carlson scored the game-winner when she walked to lead off the seventh and scored on Lydia Banse’s two-out single up the middle.

Mankato West pitcher Abigail Stierlen struck out 14 batters and walked just one to earn the victory.

Winona and Mankato West played earlier this season, with Winona winning 7-5 on May 17.

Proctor 2, Maple Lake 1 (12 innings): Proctor pitcher Madison Walsh and Maple Lake pitcher Taylor Hess engaged in an old-fashioned pitchers’ duel that lasted nearly 12 full innings. Proctor (24-1) finally settled the issue when Sophie Parendo led off the 12th by getting on base on a botched play by the Maple Lake shortstop, then went to second on an ensuing throwing error. Parendo went to third on a bunt single by Brooklynne Patterson and scored when Payton Rodberg hit into a double play.

Walsh gave up just two hits but walked seven while striking out 11 for Proctor.

Hess, a Division I signee with Kentucky, allowed 10 hits, two runs — both unearned — and walked five with 10 strikeouts for Maple Lake (23-3)

Chatfield 3, Dilworth-Glyndon-Felton 1: Chatfield (27-2) scored all three of its runs in the second inning and made the lead stand up, advancing to the Class 2A championship.

Pinch-runner Shea Jech scored on an error, and Alexis Hinckley and Devann Clemens scored on a single by Brittin Ruskell.

Chatfield pitcher Claire Springer stopped Dilworth-Glyndon-Felton for sixth innings but lost her bid for a shutout when Kayleigh Peterson doubled in the seventh and scored on Makayla Bjelland’s groundout.

Springer picked up the victory by allowing six hits and walking one. Mallory Leitner went the distance for Dilworth-Glyndon-Felton (22-5), allowing seven hits and three runs, all unearned.

Nicolet 4, Edgerton/SW Christian 1: Nicollet moved within one game of its first softball state championship — its first in any team sport, for that matter — with a victory over Edgerton/SW Christian. Second baseman Tori Adams has three hits and three RBI for Nicollet, the No. 1 seed. Shortstop Josi Hanson had two hits and scored two runs for the Raiders (23-2).

Lily Kahara led off the inning with a single and scored on a misplayed ball in the outfield by Randolph (21-5). Pitcher Sarah Christy gave up two hits, one run, two walks and struck out nine, giving her 18 strikeouts in two games Thursday.

White Bear Lake pitcher Chloe Barber pitched a shutout and shortstop Jordyn Meyer provided the offense with a three-run home run in the fourth inning Thursday to lead the No. 1-seeded Bears to a 3-0 victory over Lakeville South in the Class 4A quarterfinals of the softball state tournament at Caswell Park in North Mankato.

Forest Lake got a home run and two RBI from catcher Bethany Weiss and Hannah Tong scattered five hits and struck out seven to lift the Rangers to a 6-3 victory over Centennial.

Brainerd remained undefeated (25-0) by beating East Ridge 4-3. Brainerd pitcher Olivia Tautges was a force on the rubber, giving up three runs and striking out eight, and at the plate, with three hits, including a home run. Brainerd got the game-winning run in the bottom of the sixth when Meghan Smith singled home pinch runner Addison Hillman from second base.

Anisa Dysart and Signe Dohse hit RBI singles in the fifth inning to break open a tie game and spark Hopkins to a 3-1 victory over Chanhassen. Dohse, who led off the game with a home run, outdueled Metro Player of the Year Sydney Schwartz on the rubber. Dohse give up six hits and one run and struck out seven while Schwartz allowed five hits and three earned runs with eight strikeouts.

A pair of Big Nine Conference rivals lived up to their pre-tournament seeding in the 3A quarterfinals. No. 1-seeded Winona cruised past Rocori 9-0 on the strength of pitcher Mikayla Steffes’ four-hit, 11-strikeout gem, and No. 2 seed Mankato West spotted Monticello a one-run lead in the top of the first, rallied with two runs in the bottom of the inning and cruised past the Magic 5-1.

Unseeded Simley surprised No. 3 seed St. Anthony 3-2. The Spartans broke open a scoreless game with three runs in the fifth, then held off Huskies rallies in the sixth and seventh innings.

Chisago Lakes scored four runs in the bottom of the third and added single runs in the fourth and sixth innings behind a 10-hit attack in a 6-1 thumping of Benilde-St. Margaret’s

Proctor, the No. 1 seed, narrowly avoided its second loss of the season, rallying to beat Pipestone 7-6. The Arrows built a 6-2 lead after three innings, but the Rails came back to win on Sophia Parendo’s two-run single in the bottom of the seventh.

Dilworth-Glyndon-Felton took a three-run lead through three innings, then watched that lead dwindle to a single run but held on to defeat defending champion Le Sueur-Henderson 4-2.

Chatfield rode a three-run first inning to an 8-5 victory over Mounds Park Academy.

Maple Lake pitcher Taylor Hess, who has signed with Kentucky, outdueled Ella Voit of St. Cloud Cathedral in a 4-1 victory for the Irish. Hess gave up five hits and struck out 10.

Edgerton/SW Christian turned two singles and a double into two eighth-inning runs to pull out a 3-1 victory over Red Lake Falls.