Mankato West won the 3A championship, Chatfield won in 2A and Nicollet took 1A. 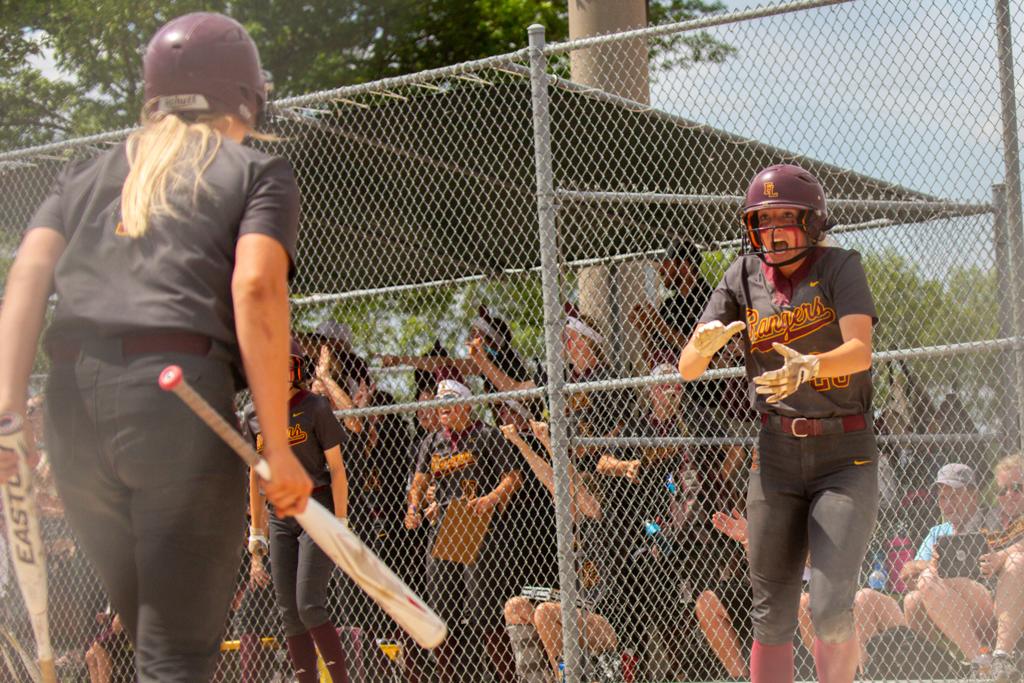 Forest Lake's Bailey Thomas enjoyed the moment after she scored the first run of the game. (Nicole Neri, Special to the Star Tribune)

But she certainly has value, which showed in a big way when she helped Forest Lake take a 6-0 victory over previously undefeated Brainerd in the Class 4A championship game Friday at Caswell Park.

The game was scoreless in the top of the fifth inning when Rangers third baseman Bailey Thomas led off with a walk. Coach Sean Hall decided it was time to force the issue.

“I asked Mark Bayers, who works with our bunters, ‘Who is the best bunter we have?’ and he said, ‘Aliyah Neeser,’ ” Hall said.

Neeser came on as a pinch hitter and put down a perfect sacrifice bunt that set up an inning that broke open the tense affair.

“She’s a role player who came in and got the opportunity to lay down a big bunt,” Hall said. “That was great for her.”

Forest Lake pitcher Hannah Tong, who had been sharp to that point, giving up just one hit, acknowledged that having a big lead presented a different set of challenges.

“That took a little bit of weight off of our shoulders and allowed us to relax a little,” she said. “I still had to treat it like it’s a 0-0 game. If they get a hit and get on base, it could start piling up just like when we were up to bat.”

Tong finished with a five-hitter, walking three and striking out seven. It was her second victory of the tournament. She also had a save in the semifinals.

Brainerd suffered its first loss of the season, but that does nothing to diminish what the Warriors accomplished, coach Shane Jordan said.

“The outcome was 6-0, but it was 0-0 and a really close game for a long time,” he said. “Our fans enjoyed it, I know our kids enjoyed it and our community really rallied around this and I’m happy for that.”

The bases were loaded and the ball was headed for the outfield. Mankato West shortstop Breck Carlson knew she had to stop it. The junior shortstop dived, snagged it just behind second base and got the inning-ending forceout at second, preserving a one-run lead.

Mankato West tacked on three runs in the bottom of the sixth en route to a 5-1 victory Friday over Big 9 Conference rival and top-seeded Winona to win the Class 3A state championship at Caswell Park.

“I saw the ball going up the middle, and I had to do anything I could to stop it,” Carlson said. “I just grabbed it and crawled over to second and tagged the base.”

Carlson’s play was perhaps the biggest in a day of stellar defense by the Scarlets.

“Our defense has been awesome all year,” said Mankato West pitcher Abigail Stierlen, who gave up seven hits and walked four but allowed only one run, largely because of the Scarlets’ defense. “I can always rely on them to make plays, even those they even shouldn’t.”

The final was perhaps the most fitting possible in Class 3A. The two team have a long state tournament history. Mankato West won the 2106 title, beating Winona. Winona was the 2017 champion and beat the Scarlets in the 2021 semifinals.

“We knew the final was going to be against Winona,” Carlson said. “We had a chance against them last year, so we knew we had to step it up this year. “

It was a nice lead, enough to assuage nerves but not quite big enough to be comfortable.

The Gophers jumped to a three-run lead in the top of the first inning Friday and rode it to a 3-2 victory over Proctor in the Class 2A championship game of the softball state tournament at Caswell Park.

Pitching with a lead was just what the doctor ordered for Springer, who admitted to battling nerves before the game.

“It’s very relieving because with the defense we have, it gives you leverage,” she said. “It still makes you nervous because they haven’t been blown out of the water.”

Proctor, which had to play 12 innings in the semifinals Thursday to make it to Friday’s final, responded quickly. The Rails got two runs back in the bottom of the first, but that’s when Springer slammed the door.

“It helped me to stay focused,” Springer said.

After battling for an entire game, Springer said getting that final out was “insane.”

“I was so happy, for everyone on our team and everyone who was here for us,” she said. “I can’t believe we did it.”

In more than 100 years of existence, Nicollet had never won a team state championship.

The Raiders got the go-ahead run in the top of the eighth inning, then needed a spectacular catch in the bottom of the inning to preserve a 3-2 victory over Moose Lake-Willow River in the Class 1A softball championship game at Caswell Park.

“It’s pretty awesome,’’ senior pitcher Marah Hulke said. “When we got the No. 1 seed, we thought we had the chance to make some history, and we went out and did that today.”

When Morgan Arndt led off the eighth with a double and scored on a sacrifice fly, it looked like everything was working in the Raiders’ favor.

Little did they know they’d need remarkable fielding to make that lead stand up.

In the bottom of the inning, with a runner on base, Moose Lake-Willow River’s Sandra Ribich hit a bomb to straightaway center field. It appeared to be a dramatic, game-winning home run, but center fielder Brooklyn Bode beat the ball to the fence, reached over and caught it.

“That was one of the most memorable things we’ve had,” Nicollet coach Bri Eldred said. “We have good pitching and we’ve had it the whole time, but making plays like that will win you championships.”

“I wanted to run out there and hug her right then,” Hulke said.

Burns said she had no idea she was at the fence when she reached up.

“I thought I still had a lot of room,” she said. “I wasn’t expecting the fence. I was just set on catching the ball.”