More softball players are being recruited nationally now because of club teams and expanded training. 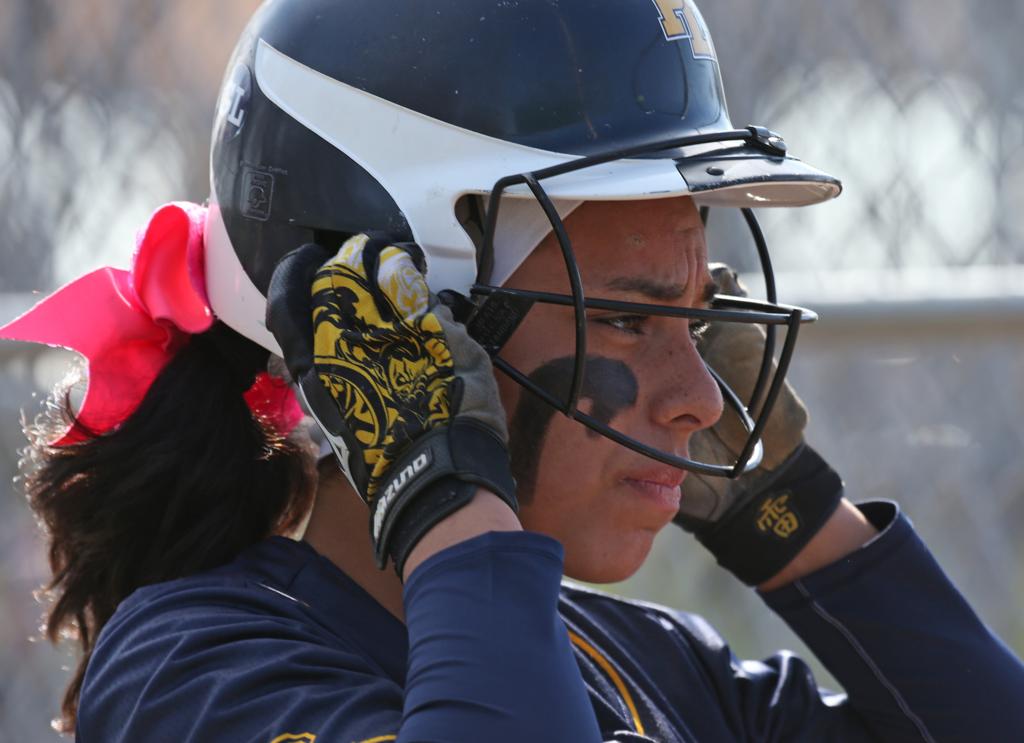 Prior Lake's Justus Perry adjusted her helmet before batting during a game at the Lakeville North Invitational. (Bruce Bisping/Star Tribune)

Following a trend that already has taken place in other girls’ sports, Minnesota is fast becoming fertile recruiting territory for college softball coaches. The number of local players moving on to Division I softball is growing, led by a group of five metro-area high schoolers who have risen to the top and made verbal commitments to big-time softball programs.

What’s more, none of them are seniors.

Fastpitch softball in Minnesota has taken a huge step forward in recent years, owing to a surge in the number of club teams and year-round training facilities, and colleges around the country are taking notice.

“The Minnesota player is becoming a legitimate recruit,” said Jack Thibault, an Orono assistant coach and board member and coach for the Minnesota Renegades club program.

With its unfavorable climate and number of competing sports, Minnesota might never produce the sheer numbers of elite level softball players who come from states such as California and Texas. But this is more about quality than quantity.

Three of the five will make the leap to the SEC, college softball’s premier league. Maple Grove junior pitcher Sydney Smith, dominant with a vast array of dependable pitches, committed to Louisiana State last year. Prior Lake sophomore infielder Justus Perry is headed to Auburn, having switched from Arizona State when the coach who recruited her took the Auburn job. Rosemount freshman Gabby Sprang, a 6-foot lefthander, selected Tennessee over Florida last fall.

Two others are staying closer to home. Roseville’s 6-3 junior pitcher Emma Hylen turned down Oklahoma and Georgia to commit to Iowa State. And Benilde-St. Margaret’s junior hitting machine, Maddie Houlihan, is following her dream to play for Minnesota. Both made their commitments after their sophomore seasons.

They all recognize that they are pioneers, helping Minnesota gain a foothold at the highest levels of college softball.

“With so many of us Minnesotans committing, we’re setting a new standard,” Smith said. “Girls are thinking, ‘If they can do it, why can’t I?’ ”

The recent growth of indoor facilities, like those in Rosemount and West St. Paul, have helped make year-round training possible.

“With all of the domes that have popped up, Minnesota is catching up quickly,” Prior Lake coach Matt Haefner said.

Even more important has been the proliferation of traveling club programs. Teams such as the Renegades and the Minnesota Sting play in summer tournaments around the nation, allowing college coaches to see local players first-hand.

“The opportunities are all because of summer ball,” Rosemount coach Tiffany Rose said. “Even just a few years ago, we only had one or two teams from Minnesota traveling. Now, there are more premier tournaments and more opportunities to be seen.”

In softball, perhaps more than in any other team sport, the pressure to be recruited starts early. Many of the top softball players receive their first contacts before they even enter high school.

“We started making trips in eighth grade,” said Perry, whose potential as a power hitter even then had coaches shaking their heads in admiration. “I loved traveling, but it was a little overwhelming at the time.”

The early contact might raise a few eyebrows, Thibault said, but teams are doing it to avoid falling behind.

“I think it escalated when a few kids who were phenoms made it big for School A, and School B had to answer questions on how they missed out,” he said.

Smith said she got her first offer in eighth grade. Sprang did, too, getting an offer from Missouri. Oklahoma coach Patty Gasso reportedly was disappointed that she was late to the Sprang sweepstakes. All before the hard-throwing southpaw had played her freshman year in high school.

“It didn’t come as a surprise,” Sprang said. “I’ve always had a goal of playing Division I softball, so I knew that would happen.”

It’s all about potential. College softball coaches are putting a premium on athletic ability, figuring that good athletes can be taught to play.

Some even go so far as to encourage their recruits to play for club teams closer to their school, hoping to keep an eye on their development. Perry, for example, will play for a team based in Birmingham, Ala., while Smith will pitch for a team in Wichita, Kan., that has ties to Louisiana St.

The trickle-down effect of Minnesota players becoming more prominent is that not everyone has to criss-cross the country to get noticed. Houlihan’s club team, the Minnesota Vortex, doesn’t travel nearly as frequently as other club teams yet she was able to land a scholarship offer to Minnesota. She said she sees the benefits in both approaches.

“I love Minnesota, and I grew up going to Gophers games, so that’s always been my dream,” Houlihan said. “But I think it’s super-cool that we can compete at just as high a level as girls from the South.”