Unfazed by allowing two runs in the top of the first inning, the Wolfpack responded with a steady performance at the plate to hand the Rangers their first loss of the season. 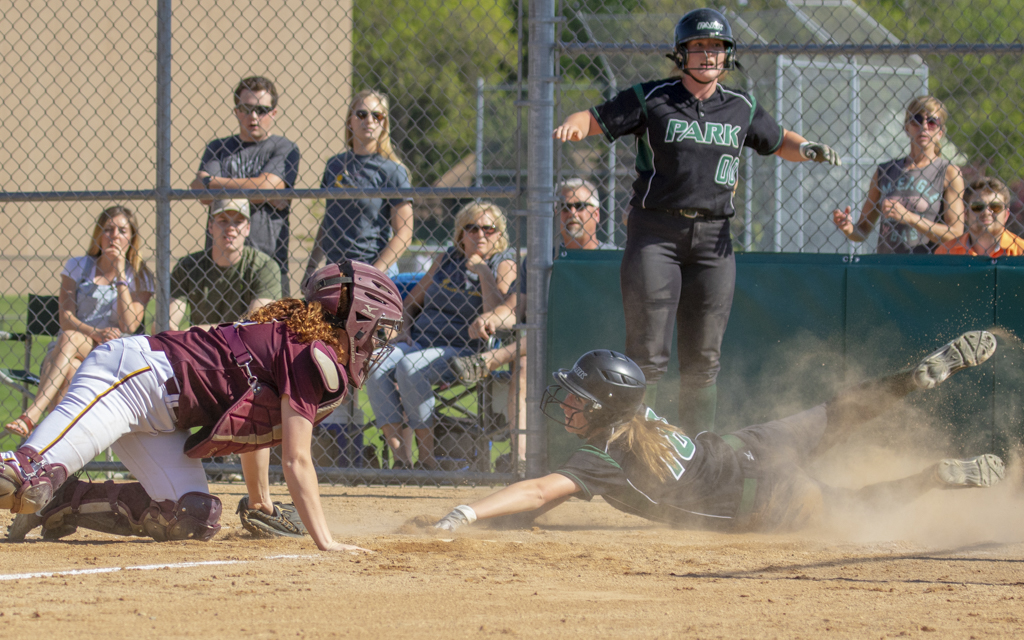 Park of Cottage Grove junior Madi Meduna slides safely into home against Forest Lake on Tuesday evening. The Wolfpack handed the Rangers their first loss of the season in a 7-4 home victory. Photo by Jeff Lawler, SportsEngine

Though his team lost to Forest Lake by one run on May 3, Park of Cottage Grove coach Bob Loshek was confident in the Wolfpack's ability to bounce back in the rematch on Tuesday.

“We needed to finish what we did the last time out,” Loshek said. “We left 11 on base and were battling every inning and putting runners on base.”

Loshek's belief was confirmed with a steady performance at the plate by his team, as Park did not waste opportunities with runners on base and knocked off Forest Lake 7-4 to hand the Rangers their first loss of the season.

The Rangers, ranked No. 3 in the Class 4A coaches’ poll, took a 2-0 lead in the top of the first inning on the types of plays that can crush the spirit of opponents. Senior center fielder Avery Jorgenson drew a walk and then scored when junior third baseman Claire Bakkestuen sent a ball over the center-field fence -- clearing the border by just inches.

“The coolest thing about this team is they don’t get rattled,” Loshek said. “They keep fighting and putting runners on base. They’re close enough after playing together to not let things get to them.”

Park of Cottage Grove (17-1, 14-1) quickly answered with an scoring outburst of its own.

Delaney Young drew a leadoff walk in the bottom of the first, something the senior shortstop is used to doing for the No. 4 Wolfpack. She has 29 walks this season, including 15 intentional.

“I just try to use my experience and try to tell my teammates what might be coming their way,” Young said. “Today, we didn’t want that lead to hang over our heads very long.”

But Park of Cottage Grove wasn't finished crossing home plate. The Wolfpack added runs in four of the game's seven innings, including a three in the second inning. The rally was fueled by senior first baseman Heather Degler's two-run home run and proved to be the difference in the game.

“We have a pretty stacked lineup,” Loshek said. “It’s huge to have (Young) and Madi (Meduna) to start and get things going for our big hitters. It’s tough to get through our lineup cleanly.”

Park of Cottage Grove’s offensive damage came mostly against one of the state’s best in Rangers senior pitcher Megan Baniecke, who entered the matchup boasting a 1.12 ERA this season. She limited her earned runs, finishing with just two, but lasted only three innings and allowed six hits and a walk.

While the Wolfpack consistently threatened on offense, they used a solid performance from pitcher Bryanna Olson to keep the Rangers from adding to their run total. The Park junior held Forest Lake scoreless until fifth inning.

“She just needed to keep them on their toes,” Loshek said. “She’s been coming into big situations since eighth grade. She gets it.”

Olson was knocked out of the game in the fifth as the Rangers mounted a scoring threat. But the Wolfpack ended it after turning to sophomore pitcher Samantha Fohrman, who finished off the game in relief and helped Park of Cottage Grove hold its lead.

A lack of offense and some rare struggles in the field contributed to the Rangers’ loss, and Forest Lake coach Sean Hall believes his group will use Tuesday's game to its advantage.

“A winner looks in the mirror after this game and looks at things to improve on,” Hall said. “We have a bunch of winners on this team.”

The victory moves the Wolfpack into a tie with the Rangers atop the Suburban East Conference standings as the regular season is coming to a close. Each team has one league game remaining, and if both win out, they will split the conference crown.

“I really thought we took it to them,” Loshek said. “It was a great game. We just came in and played like we had nothing to lose.” 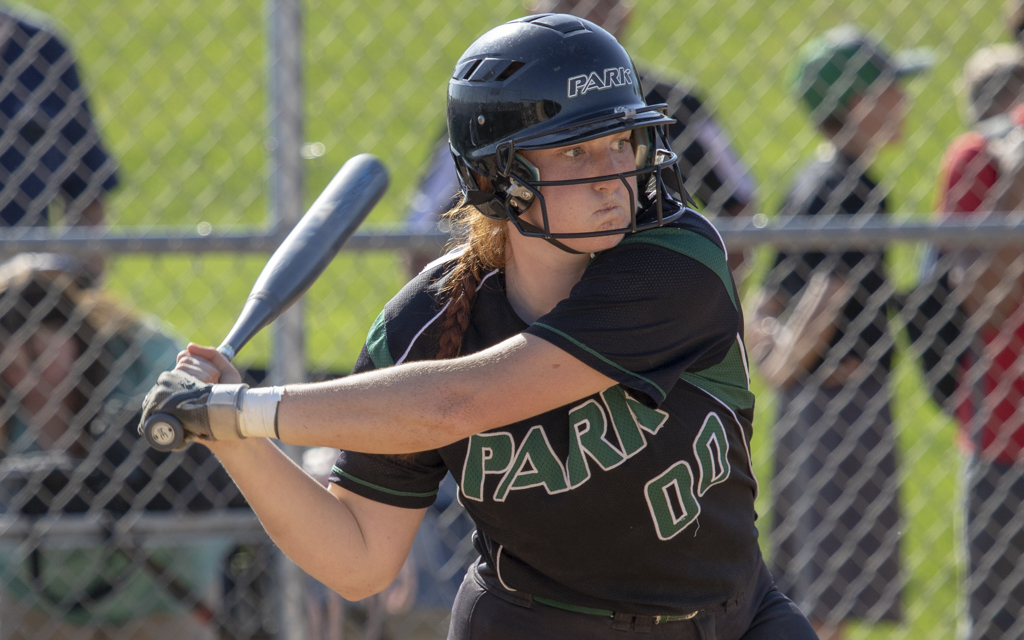 After falling to Forest Lake by one run on May 2, Park of Cottage Grove got its revenge on Tuesday and gave the Rangers their first loss of the season with a 7-4 home victory.

With the win, the Wolfpack climb into a tie with the Rangers atop the Suburban East Conference standings. Each team has one league game remaining on its schedule.

Park, which is ranked No. 4 in the most recent Class 4A coaches’ poll, trailed 2-0 after Forest Lake junior third baseman Claire Bakkestuen hit a two-run home run the top of the first inning.

But the Wolfpack quickly rallied in the bottom of the inning thanks to a pair of Rangers' fielding errors, which put runners in scoring position prior to senior catcher Saren Croker's at-bat. She didn't waste the opportunity, knocking out a single that scored both baserunners and tied the game at 2.

From there, the Wolfpack held on as the Rangers attempted a comeback. Forest Lake scored two runs in the top of the fifth, but Park answered with a run in the bottom of the inning and added another in the sixth.

Park junior Bryanna Olson got the win after allowing four runs (all earned) and striking out nine in pitching 4 1/3 innings. Samantha Fohrman pitched the rest of the game in relief.

Senior pitcher Megan Baniecke took the loss for No. 3-4A Rangers (17-1, 14-1). She gave up five runs (two earned) on six hits and struck out one in pitching just three innings. Bakkestuen finished the game in relief. 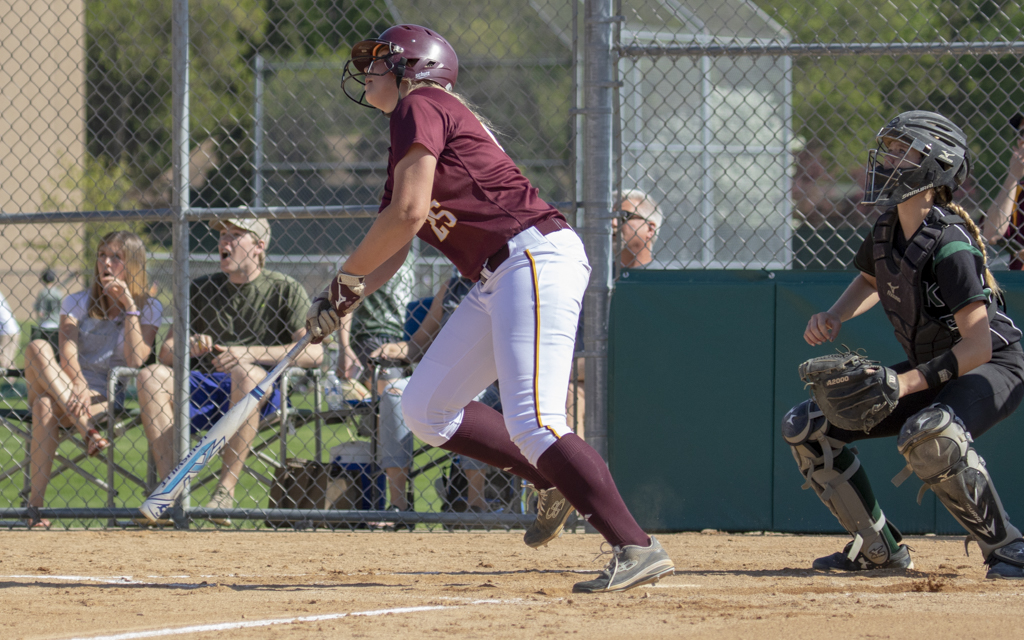