Buffalo watches three-run lead erased by Brainerd, but responds to walk off with 4A, Section 8 title

The Bison defeated the Warriors in dramatic fashion to secure their fourth consecutive trip to state. 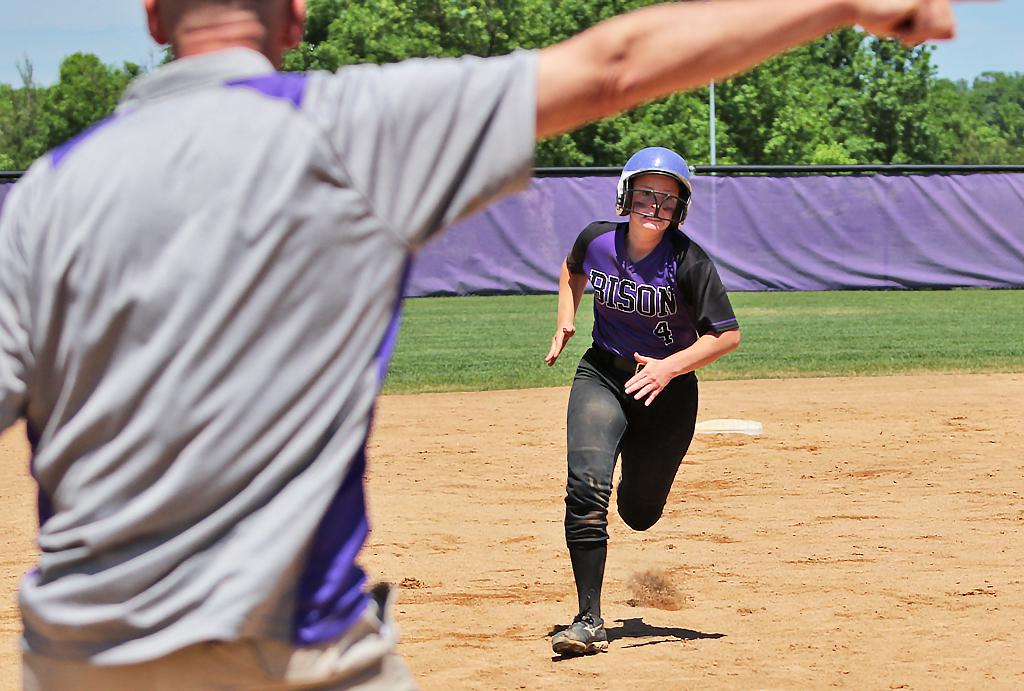 Katie Carlson heads to third and is signaled home for the walk-off run. Buffalo survived a seventh inning rally to defeat Brainerd 4-3 in the Class 4A, Section 8 final at Buffalo High School. Photo by Cheryl Myers, SportsEngine

As a pitcher, Buffalo senior Morgan DeMarais rarely finds time to spectate during the game as she constantly must focus on her next throw or at-bat and is always trying to keep a “clear mind.” 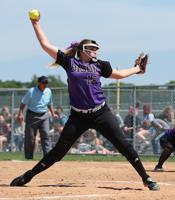 But after giving up a two-run homer in the seventh inning that tied the Class 4A, Section 8 title game against Brainerd, DeMarais was likely not going to get another chance at the plate and instead watched from the dugout.

Fellow senior Emily Hansen advanced classmate Katie Carlson to second with one out, sending Sarah Hudson to the plate. Hudson cracked a shot down the third baseline, igniting a raucous crowd at Buffalo High School on Friday afternoon.

One thought ran through DeMarais’s head through the crowd noise: “Book it, Katie.”

Carlson rounded third, scorched down the final 60 feet of baseline and made a tumbling dive into home plate that sealed the Bison a 4-3 walk-off victory. The win sends the Bison (19-2) to their fourth consecutive state tournament.

“When Huddy (Hudson) let that one go, I knew Katie was getting in — I had faith,” DeMarais said through an uncontrollable spell of laughter following the late-game drama.

Brainerd was battle-tested a day prior, winning three games in the losers bracket on Thursday. The Warriors (19-7) showed their moxie early, loading the bases in the first inning. But DeMarais struck out a batter and got some help from her outfield to retire the side unscathed.

Carlson and DeMarais hit home runs in the opening two innings to put the Bison up 3-0 early, but Brainerd remained resolute and pesky, putting runners in scoring position through the first four innings.

But playing in the clutch is an endeavor Buffalo is accustomed to with its entire starting lineup having seen the state tournament and many made the 2016 title game where the Bison finished second. That experience kept Buffalo poised in the field as the Bison stranded seven baserunners in the opening four innings.

Elaina Christiansen launched a solo home run to the left-center field wall to get the Warriors on the board in the fifth inning. DeMarais recovered well in the sixth and struck out the first two batters she faced in the top of the seventh before giving up a single to Lexi Roby. Then Christiansen replicated her fifth-inning homer with a two-run shot to tie the game.

Brainerd had plenty of wear from the three games on Thursday and the travel over the past two days. Friday marked graduation for nine Warriors seniors, and with many players missing finals for the title game, they had hoped to bring home a section championship during a turbulent time of the season.

“They have a lot going on in their life and for them to give it their all like this shows what kind of character they have as people,” Warriors coach Shane Jordan said.

Buffalo’s experience in tense situations and big games was the difference maker. Hudson, who’s headed to Villanova to play softball next year, shrugged off praise from her game-winning RBI, saying “I did the same thing last year.”

Bison coach Brad Zrust echoed Hudson’s sentiment regarding Buffalo’s ability to step up when it matters most.

“We’ve had three dramatic finishes to get to state. That’s what makes it so special because you know you have to work so hard — and things have to go your way,” Zrust said. “It’s not keeping me young, I’ll tell you that much. Credit to Brainerd they played such a great ball game.”

Hudson added: “It’s such a great end to a great season and career with these girls, and we’re to make it a little longer.”

With graduation looming next Friday, the same day as the state championship, the Bison seniors hope to return with a state title that has proved elusive in their three years at the tournament.

“Bigger and better things are coming. Always look up and never look back,” DeMarais said.

Sarah Hudson drove a game-winning single down the third baseline to bring Katie Carlson home and clinch a 4-3 walk-off victory for Buffalo over Brainerd Friday afternoon in the Class 4A, Section 8 championship at Buffalo High School.

The Bison (19-2) will make their fourth consecutive state tournament appearance next Thursday at Oswald Park in Mankato.

The Warriors (19-7) responded with an Elaina Christiansen home run in the fifth inning. She added a two-run homer in the top of the seventh to tie the game.

DeMarais gave up 10 hits, three runs and struck out nine for the Bison. 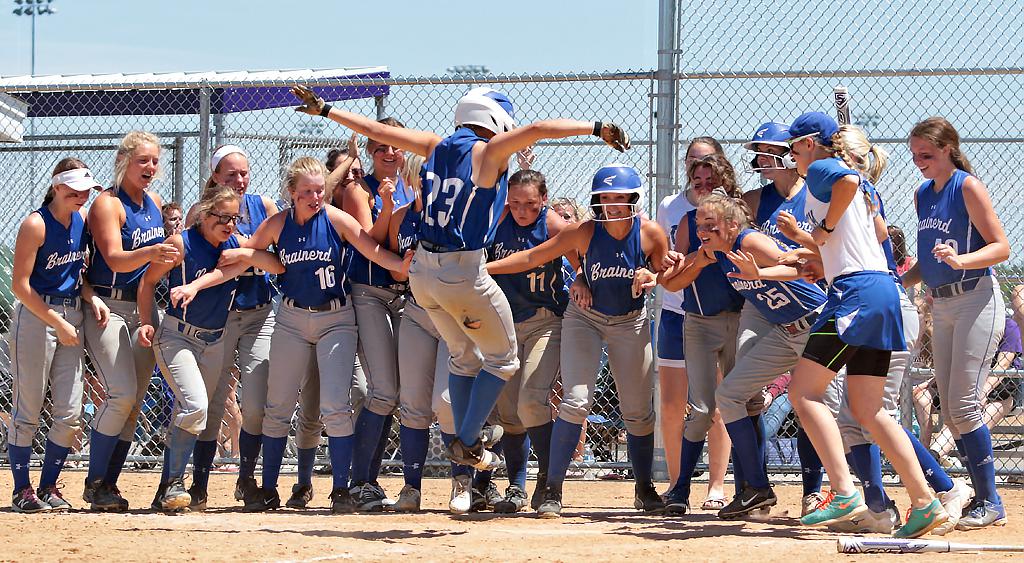 Elaina Christiansen (23) leaps onto home plate to score the tying run in the top of the seventh inning. Christiansen had three RBI on two home runs in Brainerd's 4-3 loss on Friday afternoon. Photo by Cheryl Myers, SportsEngine