Eschewing the tradition of riding one strong pitcher, the Sabers went with a three-armed, situation-based rotation. (Story includes quick previews of the four tournament classes.). 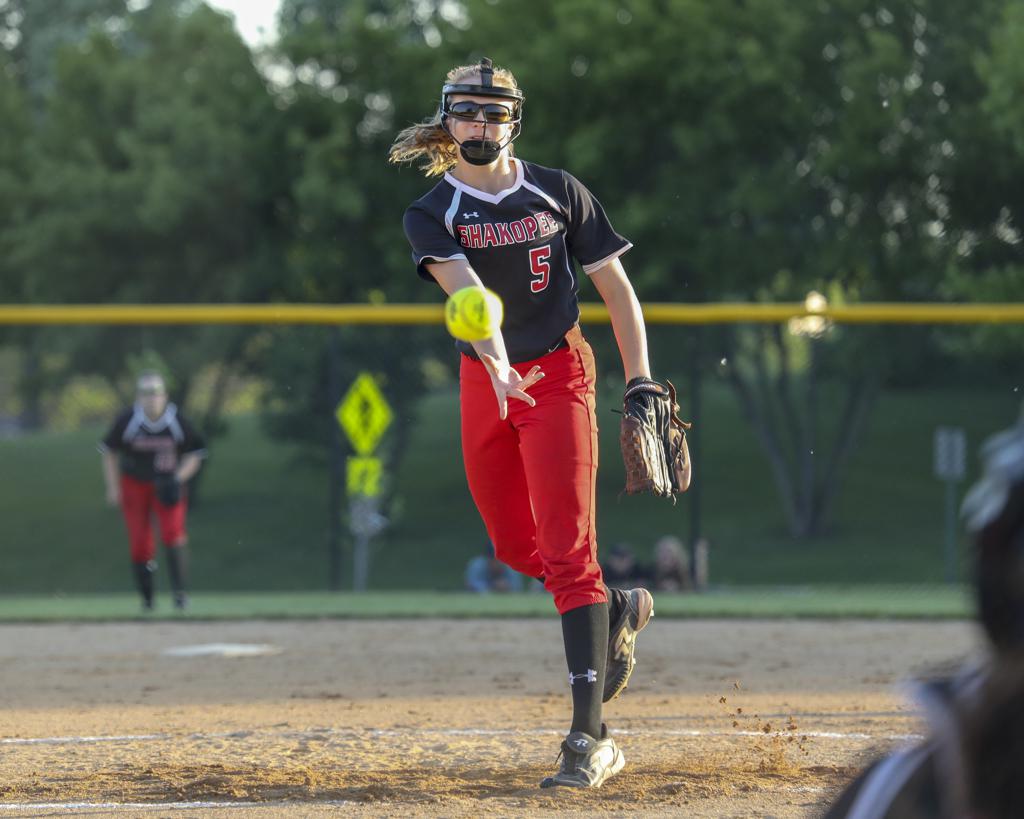 Eschewing the softball tradition of riding one strong pitcher, the Sabers went with a three-armed, situation-based rotation that more resembled baseball’s approach.

Juniors Lauren Lindahl and Mackenzie Doering and sophomore Payton Marker were all capable pitchers. Fittante, who replaced longtime Shakopee coach Neil Johnson, recognized that, in this case, three was stronger than one.

The approach helped the Sabers (17-8) reach their first state tournament since 2011. They are the No. 4 seed in Class 4A. The four-class tournament is set for Thursday and Friday at Caswell Park in North Mankato.

“We matched up all their strengths,” Fittante said. “I knew going in that all three could pitch at this level, and that we would need all three. We’ve had maybe one game all year where we used just one pitcher. It’s been two or three in every game.”

The strategy hinged on the trio putting personal goals aside and accepting their roles.

“They’re all very selfless. They’re each other’s biggest fans and their very protective of each other,’’ Fittante said. “We call them our little cult.”

Said Lindahl, “We all really complement each other. We work well together.”

The pitcher-by-committee approach paid off in the Section 2 finals. Facing No. 1-ranked Prior Lake and needing to win just one of two games, the Sabers lost the first game 6-0.

The second game is where the strategy paid dividends. Marker started and pitched well early. When Lindahl came in and struggled, Doering came in and recorded a key strikeout to protect a one-run lead. Marker returned for the seventh inning and set down the Lakers 1-2-3, sending Shakopee to the state tournament.

Replacing a legend like Johnson, who had been the only coach in program history, Fittante understood from the outset that he needed to sell players on his vision.

It helped that he had coached many of them at younger levels and that his daughter, Joie, established herself as the team’s catcher as an eighth-grader in 2017.

“I’d coached a lot of these kids since they were 8, 10 years old,” Fittante said. “It helped that most of them knew me.”

That familiarity made for a smooth transition.

“We knew his coaching style and his energy,” Lindahl said. “His enthusiasm helped. He really built us up, confidence-wise.”

Now, the unconventional Sabers have a chance at a state championship.

“Honestly, my feet aren’t on the ground yet,” Lindahl said. “It hasn’t really sunk in.”

There’s a strong line of separation between the three favorites and the rest of a very improbable field. Park of Cottage Grove (23-1), seeded No. 1, has a potent offense led by Delaney Young, Madi Meduna and Riley Perryman. Suburban East Conference foe Forest Lake (22-2) earned the No. 2 seed and boasts senior Megan Baniecke, the top pitcher in the field. No. 3-seeded Buffalo (19-2) bludgeons opponents with an offense that posted a .408 batting average, clubbed 41 home runs and averaged 8.4 runs per game. The rest of the field featured first-timers and unexpected qualifiers. Shakopee was a mild surprise coming out of tough Section 2 and No. 5-seeded Centennial (20-4) is playing in its first state tournament. Both Stillwater (14-12) and Edina (10-13) were sub-.500 teams in the regular season. Lakeville North (13-8) has a talented but young roster with three freshmen and two sophomores in key roles.

The Big 9 Conference, which has owned Class 3A since the four-class era began in 2016, sends two top contenders to the field. Junior pitcher McKayla Armbruster has 14 shutouts and 238 strikeouts for No. 1-seeded Faribault. Defending champion Winona (17-5), the No. 4 seed, is making its third straight appearance thanks to another dominant junior pitcher, Annika Anderson. The overall balance of first-time entrant North Branch (23-2), the No. 2 seed, makes the Vikings dangerous. Pitcher Samantha Pederson is 19-2 with a 0.92 ERA while the offense hit .369 and averaged 8.2 runs per game.

The top two seeds are located just eight miles apart on Hwy. 55 in central Minnesota. No. 1-seeded Maple Lake (25-1) is seeking the state title that eluded it last year when its undefeated season was spoiled by a loss to Zumbrota-Mazeppa in the championship game. No. 2-seeded Annandale finally gets the chance to show off senior pitcher Sarah Johnson, who has amassed more than 1,000 career strikeouts. Annandale and Maple Lake had been in the same section until this season.

Defending champion New York Mills (24-1) is making its sixth straight tournament appearance. The Eagles slugged their way to the 2017 title and have an offense capable of doing the same this year, averaging a touch over 12 runs per game.